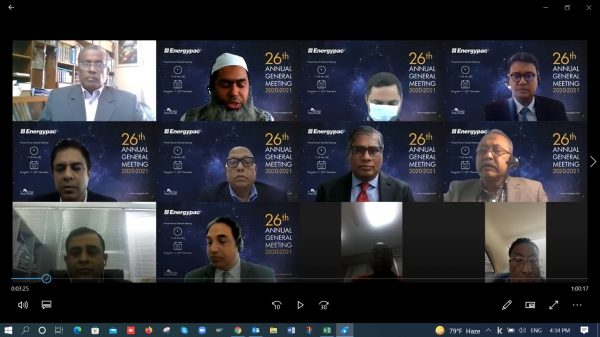 The 26th Annual General Meeting (AGM) of Energypac Power Generation Limited, a company listed with the Dhaka Stock Exchange (DSE) and Chittagong Stock Exchange (CSE), was held on 11 December 2021. In compliance with the direction of Bangladesh Securities and Exchange Commission and taking the situation created by Covid-19 into account, Energypac has conducted its annual general meeting on digital platform this year considering the health concerns of the shareholders, staff and other members present at the AGM.

Earlier, the company’s board of directors announced a 10 percent cash dividend for shareholders on 26 October. The company’s consolidated earnings per share (EPS) for the outgoing year was Tk 2.30. On June 30, the company’s net asset value per share (NAVPS) stood at BDT 57.72.

The company held its Annual General Meeting (AGM) yesterday to approve the dividend declared by the board with consent from the shareholders.