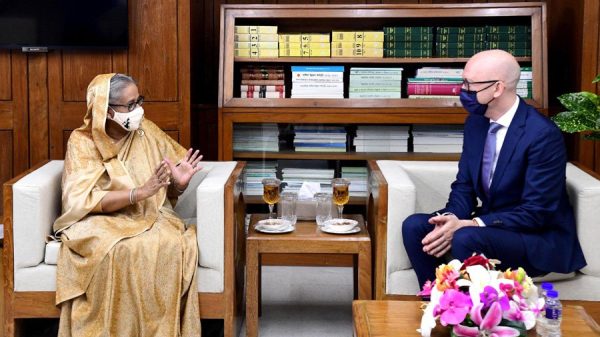 Ambassador and Head of Delegation of the European Union to Bangladesh Charles Whiteley today called on Prime Minister Sheikh Hasina at her office in the National Parliament.

At the meeting, the Premier appreciated Ambassador Whiteley’s commitment and efforts to elevate and diversify the Bangladesh-EU relations further, said a press release of the Prime Minister’s Press Wing on June 21 2022.

Sheikh Hasina explained the current flood situation in the North-Eastern part of Bangladesh, where she paid a short visit today and held a discussion meeting with the volunteers, party activists, and government agencies who are actively working to rescue the affected people.

The EU Ambassador expressed his satisfaction over Bangladesh’s preparedness and resilience to combat this kind of seasonal natural disaster caused mainly by the monsoon rain.

The Prime Minister said that her government took immediate measures to cope with the situation, and built cyclone shelters in the south and multipurpose flood shelters in the northern part of Bangladesh as disaster preparedness.

She added that Bangladesh, as a riverine country, faces the tremendous challenge of river erosion and the impact of climate change.

To that end, she briefly narrated her visions, including Bangladesh Delta Plan-2100.

Sheikh Hasina also highlighted Bangladesh’s massive progress during her Government in the last 13 and half years.

She reiterated that Bangladesh will finally graduate from LDC in 2026.

Mentioning that the EU countries are Bangladesh’s largest export destination, she appreciated the EU’s continued trade preference in the form of the Everything-but-Arms (EBA) Initiative.

She restated her Government’s continued commitment to work closely with the EU on trade-related issues.

In this regard, Ambassador Whiteley appreciated Bangladesh’s booming green garments industries and wished smooth transition of Bangladesh from the LDC.

He assured that the new GSP regulation of the EU has already considered Bangladesh’s bid for GSP+ facilities till 2029.

Sheikh Hasina, however, said that she looked forward to receiving the EU’s continued support even beyond 2029.

He reiterated that the EU is helping to repatriate Rohingyas from Bangladesh to their homeland in the Rakhaine State of Myanmar. To this end, he mentioned that they are looking for some practical approaches to do so soon.

The Prime Minister said that after the repatriation of the Rohingyas, the camp area would be restored to its natural state as before, and her government has a plan to rehabilitate the region by the local people.

While discussing about Padma Bridge, Sheikh Hasina said after the inauguration, it will open up a new horizon for the southern districts of Bangladesh.

The economic return will undoubtedly be very high as those districts will host massive industrialization, which will require more electricity generation and the construction of port facilities, she added.

To that end, the EU Head of Delegation lauded Bangladesh’s tax regime for attracting foreign investment compared to other countries./(BSS)