The power and energy sector is under pressure due to rise in import cost of petroleum and LNG and partly that of coal.

It is still difficult to accommodate even after significant rise in subsidy of initiative to reduce excess.

Energy mix with renewable energy, need to be approached by the government for sustainability.

Could be a possible option which has been ignored National budget FY2023 is expected to address some of the concerns.

There is limited effort to ease the pressure.

Imported LNG is still a major energy mix to meet the gas shortage which would rise the cost pressure further.

The budget did not assure that consumer would get some relief for not adjusting energy prices.

Still, generation based projects are the priority in the power sector budget.

Distribution related projects continues to get neglected and renewable energy based projects are not in the priority of the government.

Growth in allocation is getting slower and changes in imported tariff would significantly rise imported solar panel and other associated equipment and it would further slowed down the solar panel use.

Overall, the power and energy sector is in fiscal pressure at the end of FY2022 despite having a number of major achievements.

It is expected that the national budget for FY2023 will take into cognizance of the above mentioned issues.

Adjustment is necessary of the capacity payment fiscal allocation and to accommodate required subsidy tariff at consumers’ end given the inflationary pressure.

Higher allocation for quick implementation of transmission and distribution related projects is required.

Reduce excess capacity by less allocation for generation related projects particularly those related with fossil fuel based generation projects putting emphasis on efficient technologies, suggested by Dr Khondaker Golam Moazzem , Research Director, Centre for Policy Dialogue (CPD) during the keynote presentation in a press briefing session titled ‘Energy and Power Sector in the National Budget for FY2022-23’ organized by CPD at a city hotel on Sunday. 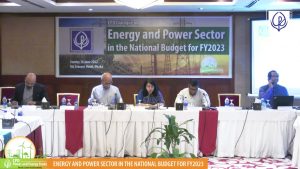 According to the think tank, the ongoing year (FY2022) is an eventful year for the power and energy sector.

Bangladesh has achieved the milestone of 100% electrification.

Prime Minister has announced the target to achieve 40% of renewable energy by 2040 as part of shifting from fossil fuel towards clean energy.

The government has passed the first two years of the 8thFive Year Plan (FY2021-25).

FY2023 will be the third year for the implementation of the 8thFYP.

It is important to review how the power and energy sector has been progressing in the first two years of the plan period.

Also, important to review how the national budget for FY2023 has been addressing the concerns of the power and energy sector.

Recovery from the Covid pandemic has multiple implications for the power and energy sector.

A total of 152 power plants are in operation of which 66 plants are gas based, 64 are HFO based and 10 are HSD based.

A significant rise in power generation capacity and power consumption is observed during FY2017-22.

Per capita generation capacity has increased by 17.9% in FY2022.

In terms of energy mix, major rise in power generation capacity has occurred due to rise in fossil fuel based power plants particularly based on HFO and HDO.

Coal based power generation has been at the same level as the previous year.

Power and Energy sector insiders, experts, activists, academics and media, among others, took part in the press briefing session.