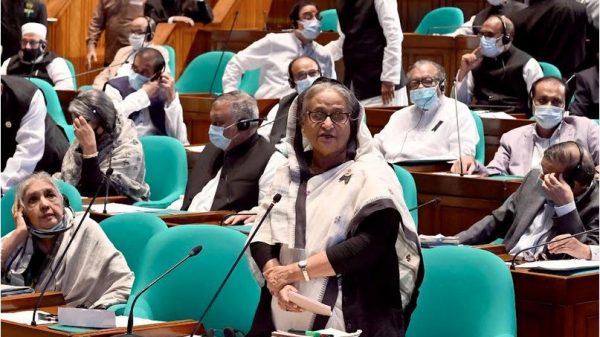 “Fazle Rabbi Miah was elected Member of Parliament time after time from a constituency. He won the election even after changing his political party, which means that his personal popularity and acceptance to the people is unparalleled,” she said.

The leader of the house made this remark while participating in the discussion on a condolence motion to mourn the death of Deputy Speaker Fazle Rabbi Miah, MP, former Japanese Prime Minister Shinzo Abe and five former members of parliament (MPs).

Mentioning that Fazle Rabbi Miah as the Deputy Speaker had performed his responsibilities with very much competently, Sheikh Hasina said that public trust and confidence is very important for any political leader. “He (Fazle Rabbi Miah) successfully had been able to gain these”, she added.

Fazle Rabbi Miah had always worked sincerely for the overall development of his constituents, she said, adding “He was a dedicated soul and contributed to the society in many ways. His death is a huge loss for us.”

Describing Fazle Rabbi as a competent parliamentarian, social activist and lawyer, she said his death is a huge loss for the country.

Sheikh Hasina expressed profound sympathy to the bereaved family members including his daughter.

Besides, the Premier also expressed her deep shock at the death of former Japanese Prime Minister Shinzo Abe. She said Shinzo Abe was a true friend of Bangladesh.

Later, the condolence motion was passed by a voice vote.