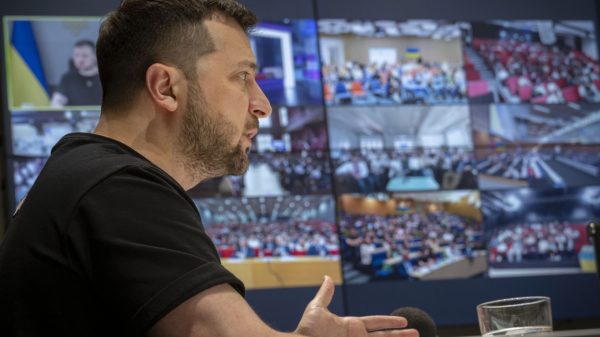 Ukrainian President Volodymyr Zelensky said his country’s forces were “doing everything” to stop the Russian offensive, with fierce battles in the east and the south.

Kyiv said Friday it had launched new air strikes in the captured southern region of Kherson, one of the first areas to be taken by Russia after the February 24 invasion.

But Zelensky said Friday “very difficult battles” were ongoing, including in the eastern Donbas region where Moscow has concentrated its firepower, especially around the eastern industrial city of Severodonetsk.

“Ukrainian troops are doing everything to stop the offensive of the occupiers,” Zelensky said in an address.

“As much as the heavy weapons, modern artillery — all that we have asked and continue to ask our partners for — allow them to.”

In the Mykolaiv region near the front line in the south, the regional governor stressed the urgent need for international military assistance.

“Russia’s army is more powerful, they have a lot of artillery and ammo. For now, this is a war of artillery […] and we are out of ammo,” Vitaliy Kim said.

“The help of Europe and America is very, very important because we just need ammo to defend our country.”

Zelensky said in his address that Ukraine must “not allow the world to divert its attention away from what is happening on the battlefield.”

In the town of Lysychansk, located just across a river from Severodonetsk, people told AFP about their stark choice: stay and brave the shelling, or flee and abandon their homes.

Yevhen Zhyryada, 39, said the only way to access water was by heading to a water distribution site in the town.

“We have to go there under shelling, and under fire,” he said.

“This is how we survive.”

Shockwaves from the conflict have reverberated around the world, with fears mounting of a global food crisis — Ukraine is an agricultural powerhouse and a major grain exporter.

An adviser to French President Emmanuel Macron said France was ready to assist in an operation to allow safe access to Ukraine’s Black Sea port of Odessa.

It has been subject to a de facto blockade by Russia, with grain waiting to be shipped.

France wants “victory for Ukraine,” the advisor added after Macron sparked controversy recently by suggesting Russia should not be humiliated.

Moscow poured its troops across the border into Ukraine on February 24 after weeks of warnings from the United States and its allies that Russia was planning an invasion.

U.S. President Joe Biden said Friday that Zelensky had brushed off those warnings.

The war has devastated Ukrainian cities and displaced millions while putting European nations on edge.

Nine of them — Bulgaria, the Czech Republic, Estonia, Hungary, Latvia, Lithuania, Poland, Romania and Slovakia — urged NATO on Friday to beef up its eastern flank.

Western countries reacted this week with fresh outrage after the pro-Kremlin separatist authorities in the Donetsk region of the Donbas sentenced to death Britons Aiden Aslin and Shaun Pinner, and Saadun Brahim of Morocco.

The United Nations warned that unfair trials of prisoners of war amounted to war crimes.

Zelensky separately praised British leadership and its support for Kyiv’s fight against Russia during an unannounced visit from U.K. Defense Secretary Ben Wallace.

Kyiv has been critical of countries — including Germany and France — for the slow delivery of aid and for giving too much credence to negotiations with Russia’s President Vladimir Putin.

Russia has repeatedly cautioned the West against getting involved in the conflict, with some officials warning of the risk of nuclear war.

The world’s chemical weapons watchdog said Friday it was keeping a close eye on Ukraine to monitor “threats of use of toxic chemicals as weapons.”

Putin has said that what Russia calls its special military operation is meant to “de-Nazify” Ukraine, suggesting he is merely taking territory back.

But speaking to British university students via video link, Zelensky said Friday that Russia’s claim that Ukraine was “artificially created” was as preposterous as stating Ukrainians were “not humans but a variety of plants or a species of animals.”