Fifth anniversary of forced displacement of Rohingyas to Bangladesh 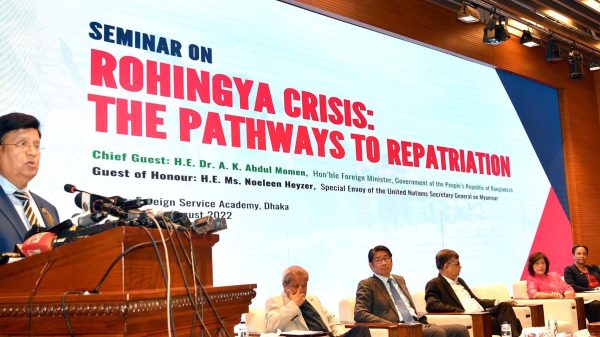 Fifth anniversary of forced displacement of Rohingyas to Bangladesh

Today the protracted Rohingya crisis has stepped on the sixth year without a single Rohingya repatriated to their homeland.

Prime Minister Sheikh Hasina saved the world from a humane catastrophe in 2017 by sheltering these persecuted people.

Bangladesh has been carrying the load in terms of providing humanitarian assistance along with the environment and societal imbalance in the areas where Rohingyas live.

If the crisis is not resolved quickly, it may create a security problem for the region and beyond. The Government is trying its best to ensure early repatriation of the displaced Rohingyas.

Return to their homeland is also the aspiration of the displaced Rohingya population.

They are receiving education, food, shelter, health care and other services in Bangladesh.

They participate in skill development activities to enhance their livelihood opportunities in Rakhine once they return.

The Rohingya crisis is not a bilateral issue. Its origin and solution lies in Myanmar. Bangladesh tried to arrange safe, sustainable and voluntary repatriation of the Rohingya to Rakhine State through negotiations with Myanmar following the bilateral instruments.

Unfortunately, not a single Rohingya could return to Myanmar yet for the non-committal attitude of Myanmar towards their obligation enshrined to the bilateral mechanisms.

Due to the frustrating development on the bilateral front in commencing the repatriation, Bangladesh involves friendly countries to assist their repatriation.  Starting their safe, sustainable, voluntary repatriation to their homeland Rakhine State as early as possible should be a priority through dialogue and discussion.

The international community should focus on creating a safe and conducive situation on the ground in northern Rakhine and the smooth conduct of repatriation and reintegration to the Myanmar society for the Rohingyas.

In the true spirit of responsibility and burden sharing, they should make concerted efforts to resolve the Rohingya crisis in all its dimensions. Ensuring accountability of the perpetrators of the atrocities committed is needed to be supported with the view to create confidence among the Rohingyas for repatriation. 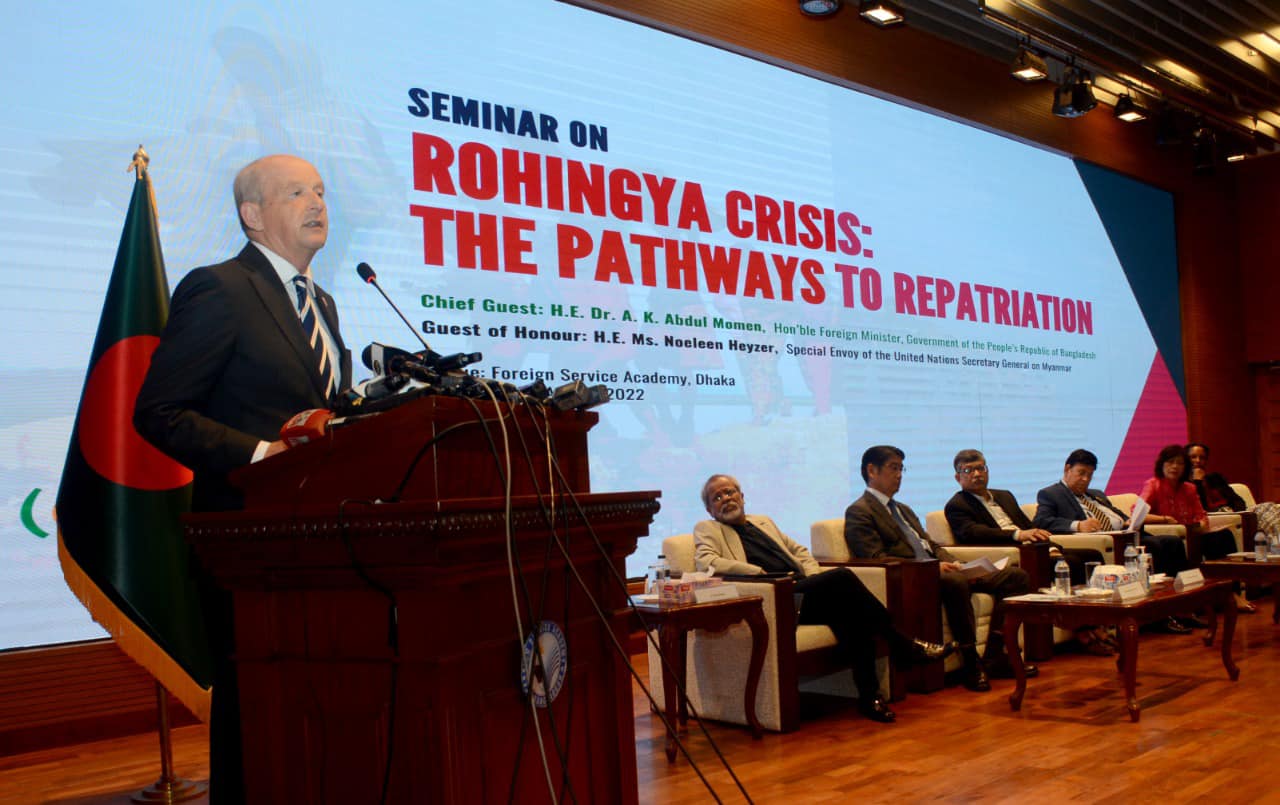 The UN and the partners must undertake tangible actions and projects to create a conducive environment with safety and security.

ASEAN can take the lead role in such engagements. The presence of ASEAN and international actors in the Rakhine state can help to reduce the trust deficit between Rohingya and Nay Pyi Taw and help confidence building that is essential for smooth repatriation. 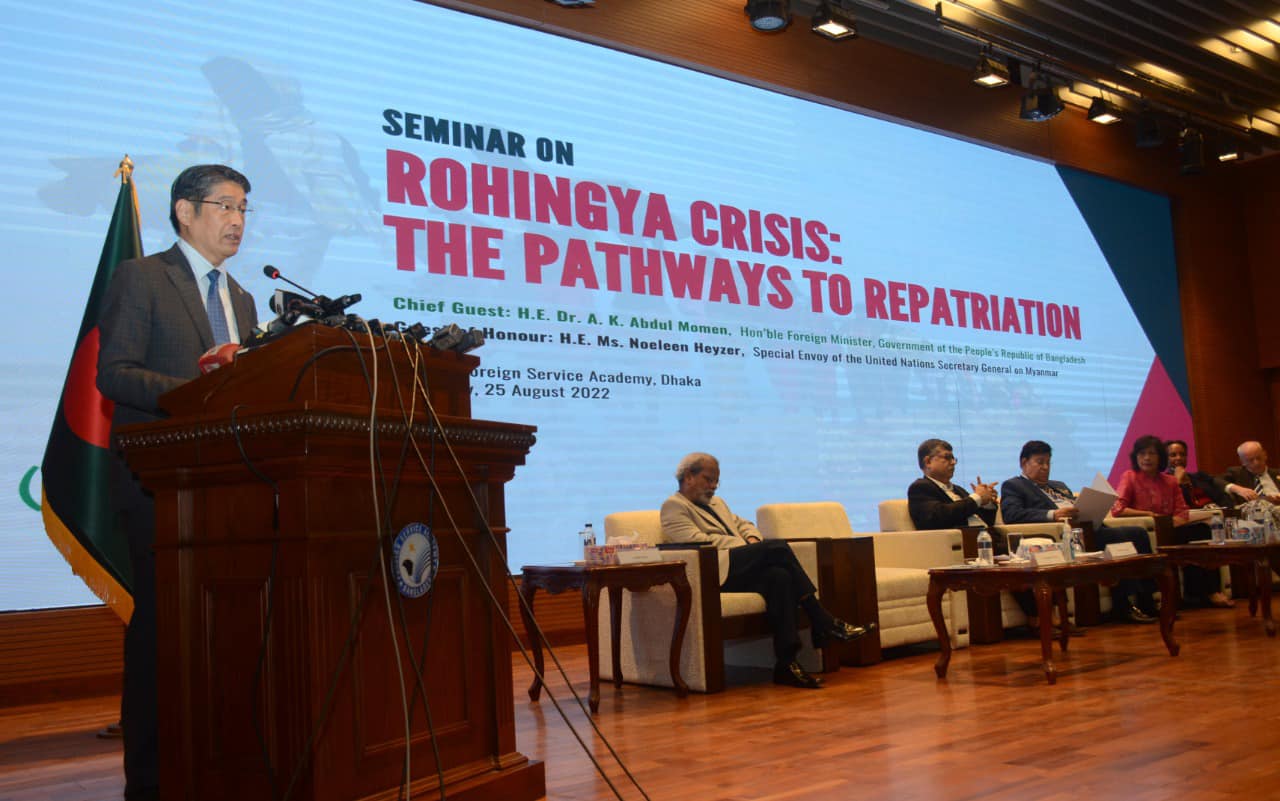 According to a release by the Embassy of Japan in Bangladesh on 25th August, H.E. Mr. ITO Naoki, Ambassador of Japan to Bangladesh attended the “Seminar of Rohingya Crisis: the Pathways to Repatriation” organized by Dhaka University, Center of Genocide Studies at Sugandha State Guest House. 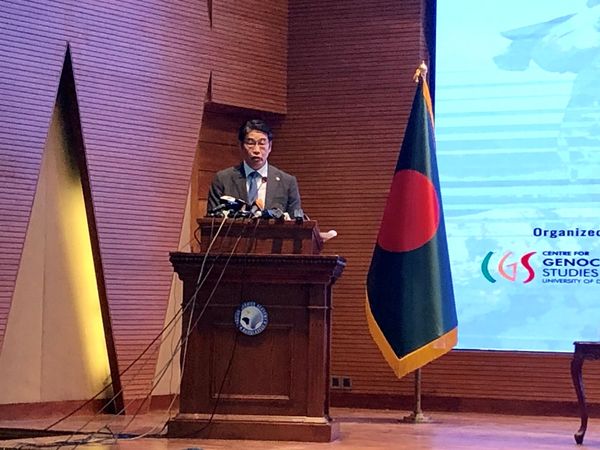 The seminar held on the day to mark 5th year since the massive influx of Rohingya refugees to Bangladesh. H.E. Dr. Abdul Momen, the Honorable Foreign Minister, Mr. Masud Bin Momen, Foreign Secretary, H.E. Ms. Noeleen Heyzer, Special Envoy of the United Nations Secretary General on Myanmar, H.E. Mr. Anne van Leeuwen, Ambassador of the Netherlands to Bangladesh, Ms. Rowe Mackenzie, the refugee coordinator of the Embassy of United States of America, also participated and delivered a speech in the event.
During his speech, H.E. Mr. ITO Naoki expressed his appreciation to the Government of Bangladesh to provide shelters to a million of Rohingya refugees for five years. Following to that, he referred to the new contribution, total 8.2 million USD to UNHCR and WFP, which Japan has decided in August. He also highlighted the importance of changing the ground reality in Cox’s Bazar and in Bhasan Char Island, so that Rohingya refugees can have a hope toward the future. With this regard, he suggested the Government to make an exclusive effort by allowing private companies to hire Rohingya refugees to boost the livelihoods and skills development opportunities in Bhasan Char.
At the end of his speech, he expressed his by saying, “Japan will continue to work closely with the international community, including ASEAN, to improve the situation in Myanmar, and make our utmost effort to create conditions for voluntary, safe, dignified and sustainable repatriation.
Japan will continue standing by the Government and the people of Bangladesh.”