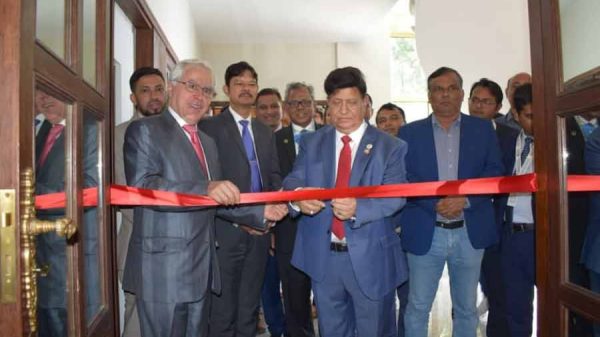 Foreign Minister paid his homage to the Father of the Nation Bangabandhu Sheikh Mujibur Rahman by placing a floral wreath at his mural portrait lying on the wall of the Chancery building. He said the Chancery building symbolizes the presence of a transforming Bangladesh that has just celebrated 50 years of its independence last year, and stands poised to enhance its global footprints by surging ahead with its value-based diplomacy in pursuit of its national development aspirations. He said, this building is not just a mere construction or enclosure, but bears our message to our friends in Portugal that we value our shared history, that we cherish our present-day human connectivity, and that we look to our shared future with much anticipation and optimism.

The resident Embassy of Bangladesh in Lisbon was first established at a rented building in July 2012. The government of Bangladesh bought two properties in 2020 for permanent addresses of the Chancery and Ambassador’s Residence. Shifting from rented properties to these own properties took place after their remodelling and renovation. This is one of the largest Chancery buildings of Bangladesh in Europe.