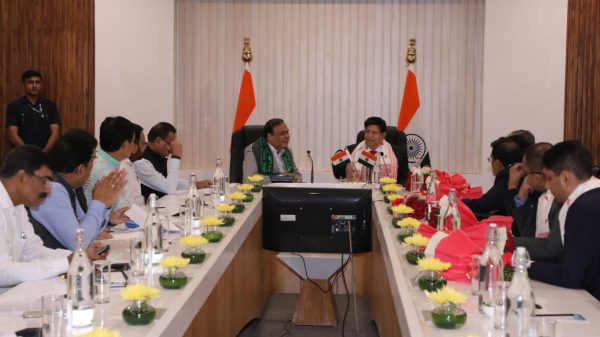 During the meeting, Foreign Minister gratefully acknowledged that Assam occup’es a special place in his heart, as he took shelter in Assam in 1971 during the Liberation War of Bangladesh. He informed that Bangladesh is in the process of extending 200 scholarships for the family members of the war veterans from India who fought for the liberation of Bangladesh.

Dr. Sarma stressed that Assam is keen to engage with Bangladesh for common benefit of the two peoples through promotion of trade, commerce, connectivity and cultural activities. He appreciated the recent pace of economic development in Bangladesh under the dynamic and visionary leadership of Prime Minister Sheikh Hasina. He praised the success of Government of Bangladesh in dealing with Covid-19 pandemic. Dr. Sarma recalled the significant role of railway connectivity with Chattogram port city in trade during the British period. The Chief Minister informed that Assam is developing advanced medical and education institutions and can be a destination for the people of Bangladesh for medical treatment and study purposes. He noted that peace and stability are the key factors that helped the development process of Assam and thanked the Honourable Prime Minister of Bangladesh for her Government’s ‘zero tolerance policy’ to terrorism and insurgency. In this regard, Dr. Momen stated that the development of Bangladesh and India are complementing each other and many Indians are working in Bangladesh. Bangladesh is the fourth largest remittance sending country to India.

Bangladesh Foreign Minister mentioned the traditional linkage between the people of Assam and Sylhet. He noted Bangladesh and India are enjoying the best of their relations under the able leadership of Prime Minister Sheikh Hasina and Prime Minister Narendra Modi. He underscored that Assam could take advantage of Bangladesh’s dynamic socio-economic growth, both as a market for their products and also as a source of quality products at a competitive price. He emphasized enhancing trade and commerce between the two countries and promoting tourism. Further, he suggested that river transportation could be an effective means for amplifying the bilateral trade.

Foreign Minister of Bangladesh and Chief Minister of Assam expressed satisfaction over the existing relationship and hoped it will be stronger in Feature.