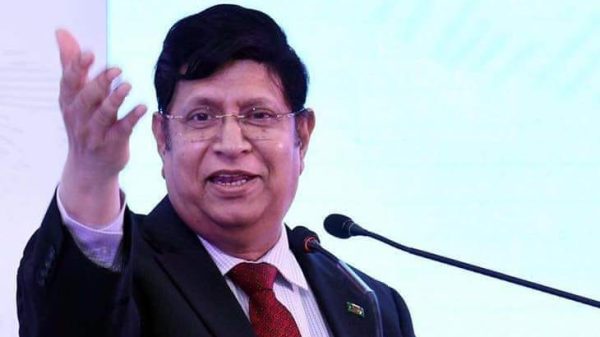 Foreign Minister Dr A  K Abdul Momen highlighted the devastating impacts of climate change and urged for finance, technology transfer and capacity building for the developing countries, while delivering country statement at the Stockholm+50 international meeting, held yesterday in Stockholm.

While speaking at the plenary session of the meeting, Foreign Minister Momen said that the Stockholm+50 platform has offered a unique opportunity to rethink the critical role of the global community for a resilient, healthy and prosperous planet for all. He emphasized on Bangladesh government’s climate actions and initiatives to save the planet including ‘Mujib Climate Prosperity Plan’ and adoption of ‘Planetary Emergency’ resolution by the Parliament.

Stockholm+50 international meeting is convened by the United Nations and hosted by Sweden with support from the Government of Kenya. Under the theme ‘Stockholm+50: a healthy planet for the prosperity of all–our responsibility, our opportunity’, this high-level meeting commemorate the 1972 United Nations Conference on the Human Environment and celebrate 50 years of global environmental action. Around 150 States Members of the United Nations, Members of the UN Specialized Agencies, IGOs, IFIs are taking part in this international meeting.

On the sidelines of Stockholm+50, Foreign Minister Momen attended an intergenerational roundtable on exploring how to better understand, think and act for future generations. In the roundtable, he shared the important policies of the government to leave behind a safe, climate resilient and prosperous Bangladesh for the young generation.  Bangladesh also joined a “Ministerial Statement on Future Generations” which aims to recognize the responsibilities of the present generations towards future generations and take specific actions to leave a planet that will not be irreversibly damaged by climate change and other human activity.

On the sidelines bilateral meetings were also held with the Administrator of the United Nations Development Programme (UNDP) and the Executive Director of the Green Climate Fund (GCF).