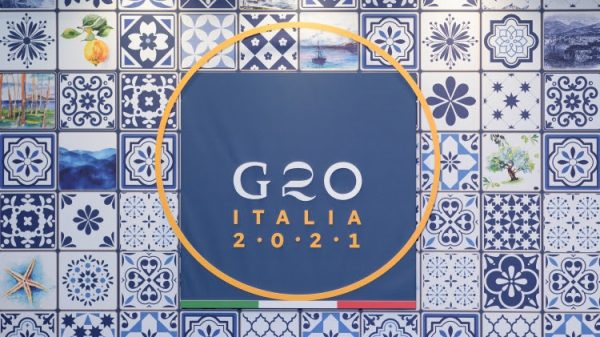 G20 leaders are meeting in Rome for their annual summit as the world faces a convergence of crises with the global pandemic, unemployment, lack of social protection, rising debt burdens and inaction on climate change.

The COVID-19 pandemic continues to stall a global economic recovery. Less than 2% of the population in many developing countries are vaccinated. Developing countries will be $12 trillion poorer through 2025, with a continued failure to roll out vaccines, wiping out an additional $1.5 trillion in income.

“The pandemic exposed the fault lines of the global economy, the fragility of global supply chains, and the lasting damage caused by decades of policies that have pushed for deregulation and privatisation.

“G20 governments must support a TRIPS waiver, ensure universal access and equitable distribution of vaccines, treatments, and tests through increased financial support for COVAX, and recognise SARS-CoV-2 as an occupational hazard and COVID-19 as an occupational disease,” said Sharan Burrow, ITUC general secretary.

The world has lost the equivalent of 255 million full-time jobs since the beginning of the crisis, and an additional 130 million jobs are still at risk. Fifty-four per cent of people surveyed in ten G20 countries believe that their government should be doing more to create jobs for workers.

“We have a global jobs crisis – with low-paid, insecure work on offer, a childcare and aged care shortage, and a great many jobs that need to become climate friendly. Governments need to show they are committed to action with jobs plans that include investment in skills and industries to deliver the 575 million climate-friendly jobs needed by 2030.

“ITUC analysis of 35 countries representing 61% of global GDP and 48% of the global population shows that only eight countries have concrete plans to create jobs. Seventy-seven per cent of the countries analysed by the ITUC are failing to invest in sustainable infrastructure and the care economy to create climate-friendly jobs,” said Sharan Burrow.

Pierre Habbard, general secretary to the Trade Union Advisory Committee to the OECD (TUAC), said: “The G20 has to step up coordinated action to achieve recovery and equitable growth with quality jobs. G20 deliverables over several years, including policies for climate, digitalisation and the new global tax agenda, should be bundled together and must lead to tangible solutions.

“The G20 has to become serious about competition and data governance to put a halt on digital market concentration under which public budgets, smaller competitors, consumers and workers suffer. The G20 also has to make a clear statement in favour of a better-financed and sufficiently staffed public sector – the ones who carried the pandemic on their shoulders, and still do, need far more support.”

The Labour 20 is calling on G20 leaders to commit to

The G20 summit takes place on the eve of the UN Climate Change Conference (COP26) in Glasgow.

“By delivering on existing commitments to $100 billion in climate finance and increasing their climate ambition with just transition, G20 leaders could set the tone for the UN climate talks that will set the world on a path to limit global temperature rises to 1.5 degrees. Failure of leadership by the G20 puts at risk both people and the planet,” said Sharan Burrow.