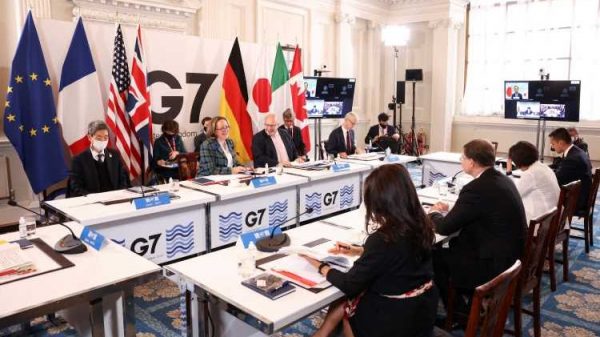 The decisions were made at a 22 October meeting convened by this year’s G7 host country, the UK.

In their communiqué, the ministers said: “We stand united in our commitment to build back better from the pandemic and provide our citizens with the intended benefits of free, fair, and sustainable trade, including raised living standards, full employment, sustainable development, and a protected and preserved environment.”

In a statement from the meeting on eliminating forced labour from global supply chains, they called for all countries, multilateral institutions and businesses to

Importantly, the framework provided by the United Nations Guiding Principles on Business and Human Rights is recognised as the basis for effective action around rights violations in global supply chains, as is the need for government procurement and publicly funded projects to uphold international labour standards.

ITUC General Secretary Sharan Burrow said: “The ministers rightly acknowledge the importance of trade policy in tackling forced labour. This needs to be followed through with the establishment of a labour committee at the World Trade Organization, with the involvement of the social partners and engagement with the ILO, chaired by governments that are committed to eradicating labour rights violations from global trade.

“Their call for labour standards to be upheld in the digital economy is welcome and must be backed up by regulation that tackles the erosion of the employment relationship and other violations of workers’ rights in platform businesses and other digitally based companies.”

The digital trade principles agreed by the ministers state: “Labour protections must be in place for workers who are directly engaged in or support digital trade, providing decent conditions of work.”

This is a positive sign; nevertheless, much more needs to be done to protect rights. The basic principle of an open, free, and secure internet must be underpinned by international and national measures to protect privacy; holding corporations, such as Facebook, accountable for profiteering from spreading hate-speech and disinformation; and breaking the anti-competitive stranglehold of a small number of digital giants such as Amazon.

“Trade ministers are now seeing that labour rights must be integrated into the rules of world trade, and this needs to be made real through concrete action,” said Sharan Burrow.