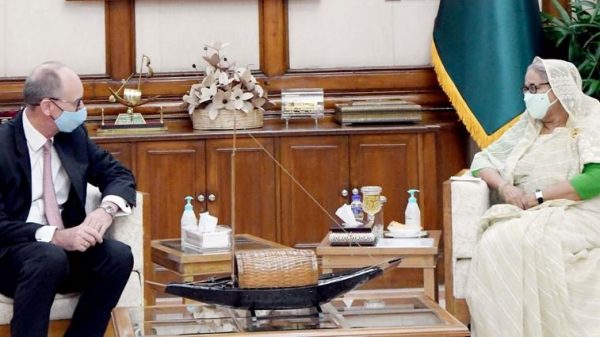 Germany today expressed its interest to cooperate Bangladesh on climate and energy issues.

The envoy said the two countries are passing 50 years of their diplomatic relations.

He appreciated overall Bangladesh’s  development and the mechanism to tackle the Covid-19 situation aptly.

The envoy said the death rate is relatively very low in comparison with the other countries.

On the climate change issue, Sheikh Hasina   said Bangladesh has started the adaptation and mitigation programmes with its own resources.

The Prime Minister highlighted various measures taken by her government and said a total of six crore doses (with single and double doses) have so far been given to Bangladeshi people.

She recalled with gratitude Germany’s cooperation during Bangladesh’s Liberation War in 1971.