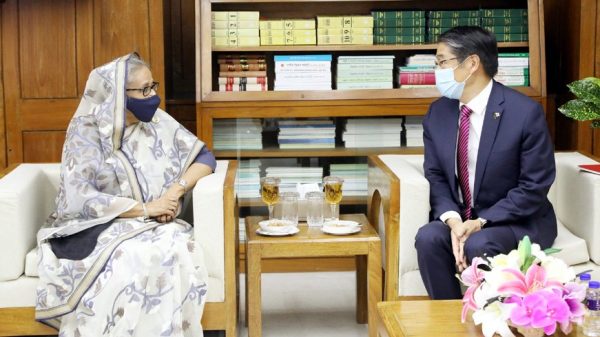 Prime Minister Sheikh Hasina today said her government is mobilising every possible support to reduce sufferings of the flood affected people, apprehending that the ongoing flooding might be continued till September next.

“The government is arranging everything to reduce sufferings of the flood affected people,” she told Japanese Ambassador in Dhaka Naoki ITO as he paid a call on her at her Sangsad Bhaban office here.

The premier said, “This time the fury of the flood is little bit higher. It may continue till September.”

The Japanese Ambassador said that today is the World Refugee Day and Japan wants early repatriation of the Rohingya refugees.

To this end, Sheikh Hasina said that her government has provided better facilities for Rohingyas in Bhashanchar.

About the much-hyped Padma Bridge, she said that she first laid the foundation stone of the bridge on July 4, 2001.

Later, the works of the bridge were not progressed and after coming to the power again, the AL government has completed the job.

The premier with due respect recalled the Japanese support since independence of the country.

Sheikh Hasina also mentioned that Father of the Nation Bangabandhu Sheikh Mujibur Rahman was the great admirer of Japan for its huge socioeconomic and technological advancement.

Japanese Ambassador Naoki ITO said that his country will continue to extend its support to Bangladesh’s development works. He also invited the prime minister to visit Japan by November next, saying that Japan will be happy if she can pay the visit.

He also handed over a photo album to the premier titled, “A visit to Japan by Bangabandhu Sheikh Mujibur Rahman in 1973,” published marking the 50th years of diplomatic ties with Japan.

The ambassador said that he is eagerly waiting for the inauguration of the Metro Rail. He also hoped that Japanese companies will start work in the Araihazar special economic zone from the next year.

About Bangladesh’s democratic process, Sheikh Hasina said that it (democracy) was confined in the cantonment for a long time “overtly or covertly as they (military rulers) ruled the country. We have restored the democracy from the captivity,” she said.

The premier also said that the media in Bangladesh is free with operating 33 TV channels. “Before that only state-run Bangladesh Television was functioning,” she added.