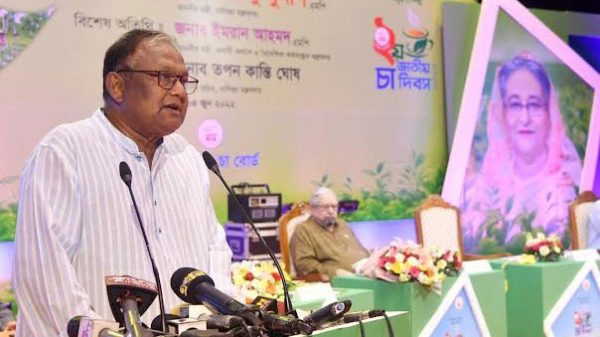 Commerce Minister Tipu Munshi said that the tea production in Bangladesh was 60 million kg in 2009, which increased to 97.51 million kg in 2021, but the product was not exported much, so the government has decided to take steps to increase its export.

“There is a huge global demand for our tea, but it is not exported due to an increase in local demand and lack of export incentives. So, we have taken steps to export it after meeting the country’s demand,” he told a program organized in the city marking the National Tea Day on Saturday.

Tipu said, “We have started producing tea in the country’s northern region, where 14.55 million kg of tea was produced in 2021. The government will assist traders in all areas including innovating new varieties of tea, increasing production, auctioning, and marketing”.

This will increase the country’s tea production and enable us to export it after meeting the local demand, he added.

Minister for Expatriate Welfare and Overseas Employment Imran Ahmad, who was the special guest at the programme, said, “Tea is one of our most important cash crops and once tea was the second most exported product.”

“We have taken new initiatives for the tea industry, but one cannot get very quick returns in this sector as it takes four-five years to collect tea leaves from a garden. Investors have to wait for a long time to go into production, so long-term investments are made in this industry. As a result, development of the tea industry requires long-term financial support,” he added.

National Tea Day is being celebrated for the second time in the country this year.

Father of the Nation Bangabandhu Sheikh Mujibur Rahman served as the chairman of the Tea Board from 4 June, 1957 to 23 October, 1958.

The National Tea Day is being observed on 4 June to commemorate his birth centenary, his outstanding contribution to the tea industry and his joining as the chairman of the Tea Board.