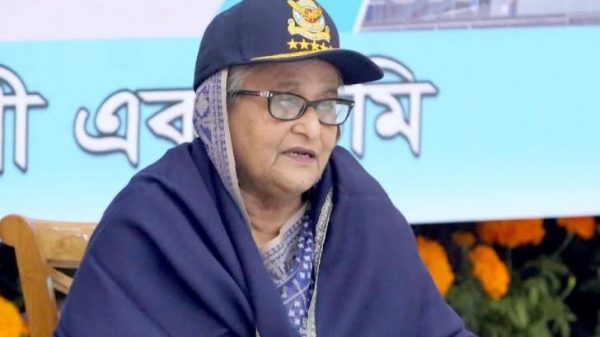 her government’s keen interest to make the air force like developed
countries, saying the ultra-modern fighter planes, air defence radar and
missile were already inducted to the force to turn the desire into reality.

The prime minister said this while addressing as the chief guest the
“President Parade (Winter)-2021” of the Bangladesh Air Force Academy, joining
virtually from her official Ganabhaban residence here.

The BAF is going to get soon various modern planes, high-performance air
defence radar, simulator, ATS simulator, laser guided bomb and anti-ship
missile which will multiply its capacity, she said.

The prime minister called upon the fresh cadets to be prepared in such a way
keeping in mind the Father of the Nation’s ideals as they can play an active
role in fulfilling the country’s expectations by serving the nation.

The prime minister greeted the new cadets as they are going to join the air
force upon completion of their three years training.

She asked the cadets to always love the country and its people and perform
the responsibilities bestowed on them with sincerity and honesty.

“Protect the independence and sovereignty of the country that were
shouldered upon you after taking the oath,” she added.

Highlighting her government’s various measures taken for the overall
development of the air force, the premier said they have purchased the fourth
generation MIG-29 and C-130 and high performance air protection radar
alongside infrastructure development coming to power in 1996 after 21 years.

Describing the armed forces as the symbol of country’s independence and
sovereignty, Sheikh Hasina said her government has been implementing the
“Forces Goal-2030” to build a developed and professional force.

The “Forces Goal-2030” was formulated in line with the Defence Policy of
1974 adopted by Father of the Nation Bangabandhu Sheikh Mujibur Rahman, she
said.

The prime minister said that they have established Bangabandhu
Aeronautical Centre to ensure safe and affordable management and overhauling
of the planes, radars and military equipment.

She said that Bangabandhu Sheikh Mujibur Rahman Aviation and Aerospace
University was established to ensure overall development of the air force and
make time-worthy the civil aviation sector.

The prime minister said, “InshaAllah, we will once attain ability in
building planes, helicopters and fighter planes with the knowledge to be
obtained through research from the university.”

Her government has always attached priority on conducting research
regarding space, she said.

Bangladesh Air Force arranged a spectacular parade and colourful fly past
at its Jashore Academy on the occasion which the premier virtually witnessed
from her Ganabhaban residence.

Chief of Air Staff Air Chief Marshal Shaikh Abdul Hannan later gave a vote
of thanks to the prime minister for joining the programme.

He, on behalf of the premier, earlier handed over the ‘Sword of Honour’
‘Chief of Air Staff Trophy’ ‘Commandants Trophy’ and other prizes among the
best cadets.

Sheikh Hasina said her government has bought the certified tier-111 data
centre and is setting up it to make the air force activities digital as part
of the government’s move to transform Bangladesh into a digital country.

The prime minister said v-set hub and terminal station for the air force
was recently purchased which will help build satellite based communication
among its ghatis and units using the Bangabandhu Satellite-1.

She also said that her government is set to launch the Bangabandhu
Satellite-2 as well.

Sheikh Hasina said her government has first taken measures to appoint
female in the armed forces to empower women.

She also expressed her satisfaction over participation of female cadets
took part in today’s march past alongside the men.

The prime minister said that the Father of the Nation had dreamt of
building a modern, professional and developed air force.

So, Bangabandhu purchased the ultra-modern fighter plane MIG-21 from
neighbouring countries alongside procuring helicopter, radar and other
military equipment for the air force, she said, adding the Mig-21 was used in
the Liberation War in 1971.

She recalled the contribution of Bangabandhu in shaping the armed forces
with limited resources during his three and a half years tenure alongside
building a war-ravaged country.

The prime minister said the Father of the Nation had built a military
academy while her government had established the air force academy from which
cadets of Palestine, Nepal, Zambia and Sri Lanka alongside Bangladesh took
the training course.

She said, “We have always given priority on training.”

Sheikh Hasina thanked the air force personnel as they stood beside the
distressed people during the Covid-19 pandemic alongside carrying huge
quantities of medical equipment from China and South Korea and bringing back
Bangladeshi expatriates stranded at the different countries.

The premier said: “The air force personnel always stand beside the people
in every disaster.”