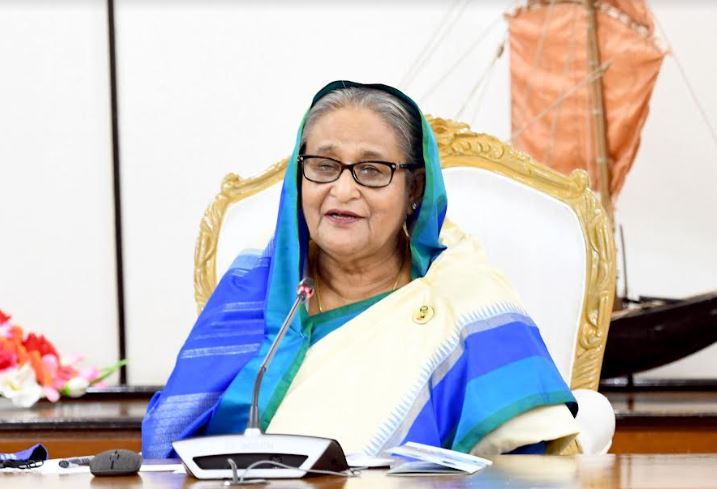 “We know that development of communication systems, power supply and employment generation are obligatory for the advancement of a country. We have been working keeping these things in mind since assuming power in 1996,” she said.

Joining virtually from her office here, she said her government has been working to ensure economic progress of the country and thus change the fate of the masses especially the grassroots people since her party Awami League came to power in 1996.

Briefly describing her government’s initiatives to ensure country’s socio-economic development, she said, “We want the pace of the country’s development to be continued.”

The Prime Minister said the people of the southern region had been deprived for a long time as they had to come to Dhaka for livelihoods by crossing several big rivers which have the highest currents, risking their lives.

Many bridges have been constructed, including the much-awaited Padma Multipurpose Bridge, Shikarpur-Duarika Bridge and Gabkhan Bridge, which have made the communication between Dhaka and southern and southwestern regions easier.

The premier said the opening of “Bangamata Begum Fazilatun Nesa Mujib 8th Bangladesh-China Friendship Bridge” over Kacha River at Bekutia in Pirojpur has established direct communication of Pirojpur with Dhaka.

She said the people can have fresh guava and hog plum (amra) of Pirojpur while the inhabitants of the district can establish food processing industries alongside other factories which would contribute immensely in changing the socio-economic condition of the district and the regions.

The construction of the bridge started on November 1 in 2018. The Roads and Highways Department constructed “Bangamata Begum Fazilatun Nesa Mujib the 8th Bangladesh-China Friendship Bridge” at a cost of Taka 894.08 crore.

The Chinese government provided Tk 654.80 crore as project assistance for the bridge while the Bangladesh government spent Tk 239.80 crore.

Later, the premier exchanged views with the local people who joined the programme in two rallies on the two sides of the bridges.

Secretary of Road Transport and Highways Division ABM Amin Ullah Nuri made a power-point presentation over the newly constructed bridge.

She said they would develop the Payra port as part of the government’s effort to give the country’s economy a strong footing.

“Once these projects are completed, our economy will get further momentum,” she said.

Sheikh Hasina said the global economy has been facing a huge setback due to the ongoing Coronavirus pandemic and the Russia-Ukraine war and sanctions imposed by the USA which have increased price hike of everything that included transportation costs and disrupted supply chain of foods.

The inflation of many countries has increased manifold and they’re even facing a crisis of getting goods, she said. “England and European countries are giving attention to saving power and water by rationing power usage and limiting use of the water. In the given context, we have to be cautious in using power and water. All have to practice austerity in using Power and electricity,” she said.

The Prime Minister asked all to cut unnecessary use of power and water as part of giving support to the government’s efforts to save energy for the betterment of the country. “If you switch off the power connection (when it is not required), your electricity bill will be lower and thus the country will be benefitted,” she said.

Against the backdrop of the price hike of the essentials and unavailability of goods due to the Russia-Ukraine war, she said, “We have to grow our food by our own initiatives,” reiterating her call to all not to leave a single inch of land uncultivated.

In this connection, she said Bangabandhu had said that he would build a prosperous Bangladesh with proper using of the land and the people the country have and turn it into a prosperous one while replying to a question of a foreign journalist about how he would build Bangladesh as everything was destroyed in the Liberation War of 1971.

“And I believe that,” she said, pledging to build a prosperous and developed country free from hunger and poverty as envisioned by the Father of the Nation using the country’s land and its vast population.