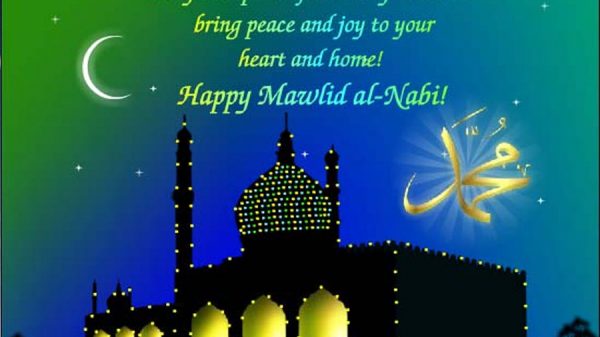 The country will observe the holy Eid-e-Miladunnabi tomorrow, marking the birth and demise anniversary of Prophet Muhammad (Peace Be Upon Him) amid massive religious festivity and fervor.

Different government and non-government organizations including the Islamic Foundation (IF) have chalked out elaborate programmes to mark the day.

President M Abdul Hamid and Prime Minister Sheikh Hasina today greeted the countrymen and the Muslims across the world on the occasion of the holy Eid-e-Miladunnabi.

In separate messages on the eve of the day, they underscored the need for following the ideals of the Prophet for peace and prosperity.

In his message, President Abdul Hamid said the holy Eid-e-Miladunnabi is a sacred and important day for the Muslims of the whole world. Allah had sent Hazrat Muhammad (PBUH) to this world as ‘Rahmatullil Alamin’, a blessing for the entire universe, he added.

He (Muhammad) had emerged as ‘Sirajam Monira’, the enlightened light in the world, the head of the state said, adding, “He showed the path of light in the era of sinful acts, injustice, falsehood and darkness and established a society based-on truth, beauty and justice”.

The Prophet is regarded as the greatest human being because of his unparallel loyalty, love and affections towards Almighty Allah, extraordinary personality, boundless kindness and great virtues, Hamid said, adding that the holy Quran termed the life of the Prophet (PBUH) as ‘Uswatul Hasanah’, the best ideal.

The President said the Prophet has been successful to discharge his duty of establishing ‘tawhid’ by establishing Islam, the religion of peace, in the world with his limitless tolerance, hard work, devotion and limitless sufferings and preached the messages of the holy Quran across the word, he added.

Apart from establishing a society based on equality and justice, the Prophet (PBUH) has given clear directives about women rights and dignity, dignity of labour and responsibility of employers, the President said.

The speeches of Prophet (PBUH) in his last Hajj will remain as the pathfinder for the mankind forever, he added.

The Prophet (PBUH) came to the world with the messages of emancipating the mankind from all sorts of prejudices, sinful acts, injustices and slavery, the premier said, adding he had called the people across the world towards emancipation and peace and torched the light of truth by shunning the era of darkness.

The Prophet had blown the wind of peace throughout the world by engaging him in establishing brotherhood, justice and equity-based society and ensuring welfare for the mankind, she said.

Sheikh Hasina expressed firm conviction that peace, justice and welfare would be ensured in the current turbulent world, including coronavirus pandemic, through following the ideals, including lessons from his life, lifestyle and worship, of the Prophet (PBUH).

Marking the day, Islamic Foundation (IF) has chalked out a fortnight-long programme from tomorrow.

State Minister for Religious Affairs Md Faridul Haque Khan will inaugurate the 15-day programme at the Baitul Mukarram National Mosque in the city on Wednesday.

The programmes include religious sermons, doa mahfi and milad, seminars, exhibition of Islamic calligraphy and posters based on the life of the Prophet (PBUH), Islamic cultural competitions, and recitation of the holy Quran and poems on him.

The 15-day long Islamic book fair will be organized on the national mosque premises from tomorrow to mark the birth and demise anniversary of the last and final Prophet Hazrat Muhammad (PBUH).

Besides, Qurankhani, doa mahfil and special prayers will be arranged at the Mausoleum of Father of the Nation Bangabandhu Sheikh Mujibur Rahman at Tungipara in Gopalganj district, marking the day.

The spiritual hub of Maizbhandar has also taken various programmes to mark the day. It will organize a discussion titled “Significance of Eid-e-Miladunnabi” at 9 am Mahanagar Natyamancha in the city’s Gulistan area and bring out a Jashne Julush (rally) at 12 noon from the venue.

State Minister for Religious Affairs Md Faridul Haque Khan will address the discussion as the chief guest with Incumbent leader of the Islamic spiritual hub Syed Saifuddin Ahmed Maizbhandari in the chair.

Marking the day, Bangladesh Television (BTV) and Bangladesh Betar will broadcast special programmes and different national dailies will publish supplementary highlighting the importance of the day.

The day is a public holiday.