How people could support BNP with legacy of brutalities ?: PM questions 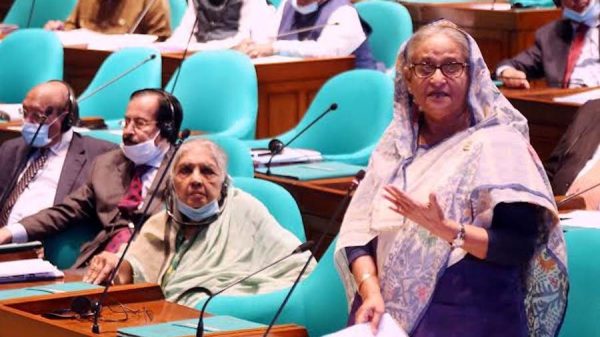 How people could support BNP with legacy of brutalities ?: PM questions

Prime Minister Sheikh Hasina today showed at the parliament audio-visual and pictures of brutalities of the BNP-Jamaat alliance and wanted to know that how the people who have minimum humanity could support BNP.

“You (lawmakers) saw the pictures of the BNP’s regime. So, tell me how do the people who have at least minimum humanity support the BNP? How to shake hands with them? This is my question?, she questioned.

The Premier raised this question while delivering her valedictory speech at this session of the Parliament.

Sheikh Hasina said that she just is able to show them (lawmakers) this few incidents of the brutalities and tortured perpetrated by the BNP-Jamaat alliance after the 2001 election.

“Like these videos and pictures, there are hundreds of incidents. It’s the real picture of the regime of BNP and BNP-Jammat alliance that how did they torture and killed people since 1975,” she added.

Displaying the picture one after another of different incidents, the leader of the house said that “Each picture narrates the brutality and torture of BNP-Jamaat after the 2001 national election that how did they kill general people, Awami League (AL) leaders and activists and members of police.”

She continued that the picture also demonstrated their (BNP-Jamaat) attack on the power station in Kansat and burnt the resident engineer alive by throwing him to fire, and also killed people across the country in such way.

“It is the regime of BNP-Jamaat alliance,” she went on.

The Prime Minister also told the house that she will also show the regime of General Ershad later how he also tortured AL leaders and activists.

She said that the Awami League (AL) has been tortured in the hands of all, but it didn’t go for taking any revenge against anyone after assuming power.

“Our goal is to develop the fate of the people of Bangladesh. That is why the AL has put concentration on the development of people engaging in full strength instead of choosing the way of taking revenge,” she said.

Sheikh Hasina noted that “Today, people of the country are getting good results from it.”

She said that the AL government has managed to continue the economic progress of the people of the country by ensuring the security after combating terrorism and militancy posed during BNP-Jamaat regime.

The Premier renewed her call to the people of the country to put concentration on boosting food production, saving and maintaining austerity in the wake of global crisis due to Covid-19 and the Russia-Ukraine war.

“We, all have to maintain austerity, have to save money and have to avoid extra expenditure,” she said, adding, “We have to be very careful and take advance preparation so the global economic recession can’t harm us.”

Regarding the remarks of BNP lawmaker Rumeen Farhana who earlier claimed in the House that BNP’s programmes came under attacks in different places including Bhola despite the Prime Minister’s clear instructions that the programme of the opposition would not be obstructed, Sheikh Hasina told the Parliament that nothing happened where BNP’s movement and programmes were peaceful.

“It is normal that opposition parties will wage movement. Yes, I told Police to say (did) nothing. It is right. But, the police did nothing first. If a man comes under attack, the person has the right to protect himself or herself,” she said.

She continued “Won’t the police have the right to protect themselves when they come under attack? Their remarks seem that they (police) can do nothing even after bombs, sticks and brickbats are hurled toward them or they come under gun attack.”

Sheikh Hasina said that she promised that none would say anything in case of peaceful procession and movement. “Where the programmes are peaceful, none say anything there,” she said.

She said BNP men try to go for attack or create a situation for media coverage.

Referring to a recent report of the World Bank, she said Bangladesh is not in food risk. The IMF also in its evaluation on August 16 last remarked that Bangladesh is in no crisis, she added.

Mentioning that most of the country’s foreign debts are long-term and soft loans, Sheikh Hasina said there is no risk regarding the loan repayment as per the IMF’s evaluation.