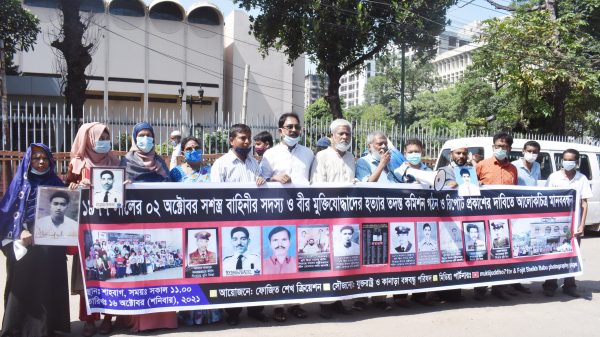 On 15 August 1975, the so-called President Zia used the army barracks from the then Deputy Chief of Army Staff to assassinate Bangabandhu Sheikh Mujibur Rahman, the father of the greatest Bengali nation of all time.

One of the 18 queues to provoke a dispute between the armies to consolidate the presidency was on October 2, 1978. Hundreds of members of the armed forces were unjustly hanged and imprisoned through this coup.

Fojit Sheikh Creation organized a human chain on behalf of the families of the victims at 11 am on Saturday, October 16, 2021 at Shahbagh Chattar in the city demanding compensation for the victims and formation of a commission of inquiry to probe the incident.

Also present in the human chain were family members of the slain armed forces members.The speakers said that Ziaur Rahman led the assassination of Father of the Nation Bangabandhu on 15 August 1975 in his own family. President Zia later used the army barracks to take over the postIn order to consolidate the situation, 18 armies formed a queue and killed the soldiers who took part in the great liberation war on 2 October 1978, sent many to jail and many others went missing. Speakers called for the formation of a judicial commission to investigate the incident on October 2 and to compensate the victims.

A photography human chain program was held in front of the Shahbagh National Museum in the capital at 11 am on Saturday (October 17, 2021) demanding formation of a commission to investigate the killings of armed forces members and heroic freedom fighters and release of reports.Another black chapter of independent Bangladesh is 2 October 1972.

On that day, members of the armed forces and heroic freedom fighters were hanged in the name of false and ridiculous trials, murders, disappearances, imprisonment and dismissals. An independent commission of inquiry was demanded. The nation wants to know about the real events of that day and those involved in it.

We must demand justice for the killed and bring out kellers’ masks to the nation. Organizer photographer Fojit Sheikh Babu said, “Those who were affected by the mock army coup in 1977 love their motherland and Bangabandhu’s Awami League.” So if this government does not do this, no one in Bengal will judge it. He requested the Hon’ble Prime Minister to take immediate action in this regard.

On October 2, 1976, about 2200 members of the armed forces, including the heroic freedom fighters, were brutally killed. We demand that the masks of these notorious and hated murderers be brought before the nation. At the same time, I appeal to all the law enforcement agencies including the Hon’ble Prime Minister Sheikh Hasina to bring the main conspirators and killers of the murders under the law from the human chain program and bring them to justice.