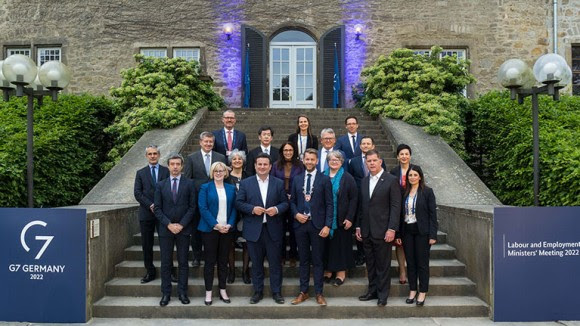 GENEVA (ILO News) – At the end of their meeting the G7 Labour Ministers highlighted the urgent need to greater focus on rights and occupational safety and health.

The International Labour Organization (ILO) has welcomed the G7 Labour and Employment Ministers  commitment to take concrete action in support of a just transition and the creation of decent work for a green economy, as outlined in the Ministerial Declaration issued at the end of their meeting in Wolfsburg, Germany.

The Declaration, issued on 24 May, reflects the focus of the German G7 Presidency on operationalizing the objective of a just transition to carbon neutrality through three main channels: investing in skills for green jobs, in particular for low-skilled adults; extending social protection to protect incomes and facilitate transitions; and improved occupational safety and health (OSH) to cover new risks linked to climate change and the policies implemented to mitigate it.

The Ministers agreed on a Roadmap towards Safe and Healthy Work in a Green Economy and acknowledged the important contribution of the Vision Zero Fund in addressing the impact of climate change on workers’ safety and health, including through a pilot project addressing climate change and OSH in global supply chains.

Another positive outcome of the meeting was the Ministers’ commitment to work towards an international consensus on business and human rights that would strengthen compliance with the standards outlined in the ILO Tripartite Declaration of Principles concerning Multinational Enterprises and Social Policy  (MNE Declaration).

The ILO also welcomed the G7 Labour Ministers support for the UN Secretary-General’s initiative for a “Global Accelerator on Jobs and Social Protection for a Just Transition “, to create 400 million jobs and extend social protection coverage to the four billion people who are currently not covered by any measure, a proposal that was also supported by the G7 Development Ministers at their recent meeting.

The ILO highlighted the Ministers’ strong support for adding safety and health at work to the existing ILO fundamental principles and rights at work, a move that is to be considered by the ILO’s Member States at the International Labour Conference , opening later this month.

The Ministers also agreed to establish a standing Employment Working Group, to promote continuity and prioritize coordinated action across the G7 on critical labour, social and employment issues.

“Now, more than ever, an integrated and coordinated response is necessary. One that prioritizes OSH in the context of a Just Transition – and one that ensures a shift towards resilient and sustainable economies that also contributes to the goals of decent work for all and protects workers from disease, ill-health, injury or death at work,” said ILO Director-General, Guy Ryder.

“By elevating OSH to a fundamental right, the International Labour Conference would express its determination that health and safety at the workplace offers significant human and economic benefits, supports inclusive economic growth, and is crucial to a human-centred recovery and the future of work,” he added.