IMED Secretary pledges to work together to ensure good governance 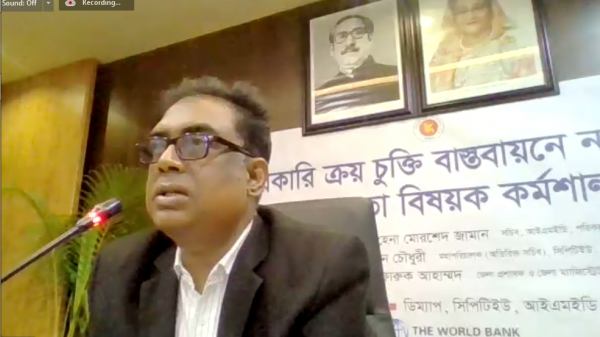 IMED Secretary pledges to work together to ensure good governance

“The more citizens participate in public procurement, the more development will be possible,” said Mr. Abu Hena Morshed Zaman, secretary of the Implementation Monitoring and Evaluation Division (IMED) under the Planning Ministry.

He was speaking as the chief guest at a virtual workshop on citizen involvement in the implementation of public procurement agreement in Sirajganj district on Thursday, 30.12.2021 at 11 am. He further said, “Citizens should be given a chance to speak.

We have to think about how to develop the country through mutual talks. Only then this movement for development will spread across the country with the joint efforts of all.” He said, “This workshop is to discuss the quality of work. Our goal is to solve problems by negotiating for the development of the country.” Calling on all stakeholders, including citizens, local government representatives and contractors, to come under one umbrella, he said, “There is interest in this from the highest level of government as well. We want this issue to be spread like a civil movement all over the country in upcoming future.”

The speakers said that the strategy to be formulated by the government for the implementation of citizen involvement in public procurement is not the responsibility of any one but of all. In order to ensure the participation of all in the public procurement activities and to bring perfection, a civic monitoring team has been formed in the upazilas with the people around the work site. Their responsibility is to monitor the progress of the work and to report any irregularities to the local government officials in charge. This group is known as the “Citizen Monitoring Group”.

Speakers also said that the Central Procurement Technical Unit (CPTU) of the Implementation Monitoring and Evaluation Division under the Ministry of Planning is working on the involvement of local citizens in the implementation of public procurement in 48 upazilas of the country in phases under the Digitizing Implementation Monitoring and Public Procurement Project (DIMAPPP). Brac Institute of Governance and Development, Brac University is CPTU’s consultant for this purpose.

Under the DIMAPPP project, monitoring of implementation of this agreement has been started in a total of 48 upazilas including 16 upazilas in the first year and 32 more upazilas from the second year. BRAC’s Community Empowerment and Legal Protection (SELP) is collaborating with BIGD in this field. The participants exchanged their experiences at the field level and sought the views of the concerned Stakeholders.

In his introductory remarks, CPTU Director Mr. Md. Aziz Taher Khan thanked everyone and said, “The main objective of today’s workshop is to discuss how to ensure citizen participation in the implementation of public procurement agreements. What do you think about it will also be heard today.”

Speaking as the special guest, Deputy Commissioner and District Magistrate, Sirajganj, Dr Farook Ahammad said, “We should ensure spontaneous participation of women. There is no substitute for making development appropriate. As a citizen, I want the work to be completed in time.” He also promised that the Sirajganj district administration would extend all possible cooperation in this regard.

In his concluding remarks, the Chair of the program, Mr. Md. Shoheler Rahman Chowdhury, Director General of Central Procurement Technical Unit (CPTU) thanked all those present and expressed his hope for a more effective approach in the future.”The government’s aim is to ensure transparency and accountability,” he said, “and for that purpose, a model of how citizens can be involved is being developed.” Finally, he said that all the views of today’s workshop will be collected and recommended to the government.