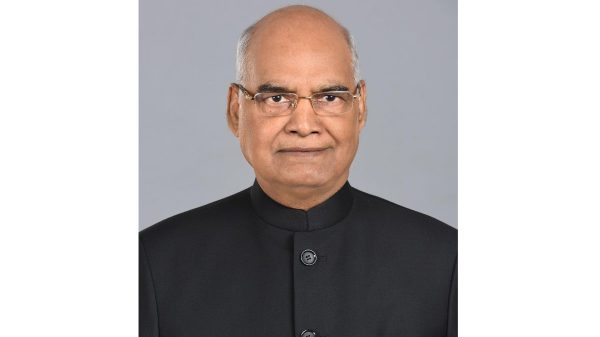 Bangladesh rolled out the red carpet to welcome
Indian President Ram Nath Kovind as he arrived here today on a three- day
visit to join the Golden Jubilee celebration of Bangladesh’s Independence.

Earlier, a special Indian Airlines flight carrying Kovind and his entourage
members landed at 11:10 am (BST) in the airport.

In his maiden tour to Dhaka, Kovind is being accompanied by Indian first
lady Shrimati Savita Kovind and their daughter Swathi Covind, India’s
education minister and two parliament members alongside several senior
officials.

President Hamid received his Indian counterpart with a bouquet at the
airport while Rashida Hamid also presented a bouquet to the Indian first lady
at the airport.

Maintaining the health guidelines due to pandemic situation, the Indian
president was given an honour guard with 21-gun salute by a smartly turned
out contingent drawn from Bangladesh Army, Navy and Air Force there.

Abdul Hamid and his Indian counterpart Kovind enjoyed the state honour
staying on the makeshift saluting dais while the national anthem of the
respective states was played.

The state guest also inspected the parade and subsequently both the
Presidents introduced the respective countries delegation to each other.

The 14th Indian president is the only foreign dignitary participating in
the event of December 16 here at the invitation of his Bangladesh counterpart
Abdul Hamid to represent India at the celebrations as a guest of honour.

Besides, dean of diplomatic core, cabinet secretary, chiefs of the three
services, principal secretary to the Prime Minister’s Office (PMO), Inspector
General of Police (IGP), secretaries concerned to the President’s office and
senior civil and military officials were also present there.

After the welcome ceremony at the airport, Kovind was escorted to the
Tejgaon old airport from where he was flown by helicopter to National
Memorial at Savar on the outskirts of the capital.

The Indian President placed wreath at the Memorial to pay homage to the
memory of Bangladesh’s nine-month-long 1971 Liberation War martyrs, planted a
sapling and signed the visitors’ book there.

Later in the afternoon, Bangladesh Prime Minister Sheikh Hasina will pay a
courtesy call on the Indian president at his suit in Pan Pacific Sonargaon
Hotel.

President Hamid will host a banquet in his honour to be joined by Prime
Minister Sheikh Hasina at Bangabhaban in the evening after talks with his
counterpart.

The Indian president will present his Bangladesh counterpart two replicas –
– Russian made T-55 tanks and Mig-21 vintage aircraft used during the 1971
war as gifts, said a Bangabhaban spokesman.

He will also enjoy a cultural event at the Bangabhaban.

On the second day of the visit, the Indian president will join as the
“Guest of Honor” the National Parade Ground function on December 16 to mark
the golden jubilee of the Victory Day of Bangladesh.

In the afternoon, Kovind will take part in a function titled “Great
Victory Heroes” in the South Plaza of the Jatiya Sangsad Bhaban to pay
respect to Bangladesh’s Father of the Nation and to celebrate the joy of
victory.

President Abdul Hamid and Prime Minister Sheikh Hasina, Jatiya Sangsad
speaker and other dignitaries are expected to attend the event.

On the third day of his visit on December 17, the Indian president is
scheduled to inaugurate and inspect the newly renovated section of Kali
Temple.

President Kovind is scheduled to fly for New Delhi in the afternoon.