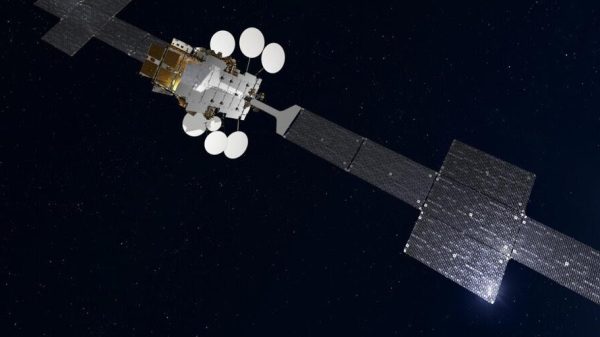 A large data-driven telecommunications satellite that uses innovative technology to keep cool as well as other innovations – developed under an ESA Partnership Project – has started its commercial service on July 22 2022.

The satellite will provide broadband connectivity for commercial shipping, aviation, governments and enterprises through its operator, SES, as well connecting underserved areas and accelerating digital inclusion.

Called SES-17, it was launched on 23 October 2021 and spent the next six months navigating into geostationary orbit.

The very high throughput SES-17 belongs to a new generation of data intensive satellites and, with its new fifth-generation digital transparent processor, is able to deliver up to ten times more capacity than traditional satellites with unmatched flexibility and efficiency.

Processing large volumes of data generates heat within the spacecraft that must be dissipated for the satellite to continue long-lasting and reliable operations. Engineering teams under the ESA Neosat Partnership Project with satellite manufacturer Thales Alenia Space developed an innovative thermal cooling system – the two-phase mechanically pumped loop – that is able to circulate fluid refrigerant to remove heat. It is a first of its kind to be featured on a large commercial telecommunications satellite.

ESA’s Neosat programme comprises both Spacebus Neo by Thales Alenia Space and Eurostar Neo by Airbus and is managed jointly by ESA and the French Space Agency CNES. It includes development up to in-orbit validation of new satellite product lines for both companies, allowing the European space industry to deliver competitive satellites for the global commercial satellite market.

Some 16 Neosat satellites have now been sold by European companies, and the programme is predicted to generate more than 20 times the return on investment to its 12 participating states and their space companies, according to an independent analysis by Euroconsult.