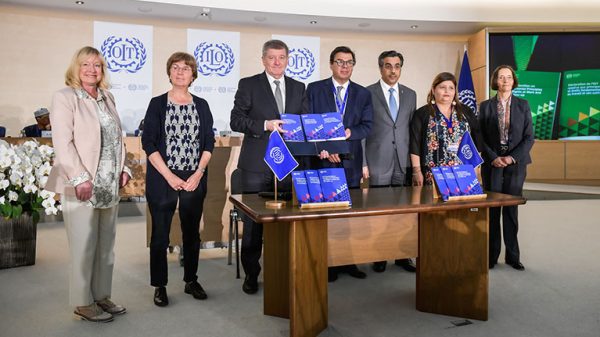 The Director-General told delegates that the 110th International Labour Conference had made history with its work on safety and health, apprenticeships, and labour standards, among other areas.

GENEVA (ILO News) – The 110th International Labour Conference  (ILC) has closed with a “remarkable harvest of achievements”, according to the ILO Director-General, Guy Ryder.

Describing this ILC as “important, harmonious and productive” he highlighted the decision to “lift a safe and healthy working environment to the status of a fundamental principle and right at work” as “making history”.

Speaking at the closing Plenary session , the Director-General commended the work of the Committee on the Application of Standards . He noted with concern that “during this conference I have received alarming, even harrowing testimony of the situation of people whose lives, livelihoods and liberty are in the balance, and it is […] in the Standards Committee that our capacity to come to their assistance resides.”

He cited important progress towards a Recommendation on a framework for quality apprenticeships, as well as fruitful discussions on employment policy, the Social and Solidarity Economy and work in the Least Developed Countries.

Referring to his report on the situation of workers in the Occupied Arab Territories , the Director-General called for a renewed effort to mobilize resources to step up support, especially for the National Employment Strategy.

This was the first Conference since 2019 that delegates were able to attend in person because of the COVID-19 pandemic. The Director-General suggested that its smooth running was due, at least in part, to “a sense of our collective responsibility. A responsibility to find agreed solutions in the face of the quite dramatic challenges facing the world of work.”

The final plenary session of the Conference adopted the conclusions of the ILC’s tripartite Standard-Setting Committee  related to the development of a new ILO Recommendation on Quality Apprenticeships that is expected to provide guidance on promoting apprenticeships and providing adequate protection to apprentices. The Committee’s conclusions include a definition of apprenticeships, a regulatory framework, and equality and diversity issues. A second standard-setting discussion will be held at the 2022 ILC.

The ILC’s closing plenary sitting also approved the report of the Committee on the Application of Standards  (CAS), which is a core supervisory body of the ILO’s standards’ system. The CAS examined 22 individual country cases related to the observance of ILO Conventions and considered a report by the Committee of Experts on the Application of Conventions and Recommendations on Securing decent work for nursing personnel and domestic workers, key actors in the care economy .

Another committee examined the strategic objective of employment, as part of the follow-up to the ILO Declaration on Social Justice for a Fair Globalization. The resulting conclusions and resolution contain guidance on developing coherent, comprehensive and integrated employment policies, and decent work opportunities that support recovery and inclusive structural transformation. The Committee  encouraged the ILO to play a leading role in supporting employment, including through the UN’s Global Accelerator on jobs and social protection for just transitions.

That Conference plenary session approved eight amendments to the Maritime Labour Convention, 2006 (MLC, 2006) , and adopted the report of the Committee on decent work and the Social and Solidarity Economy  (SSE).

Speaking during the closing ceremony, the President of the Conference, Claudio Moroni, told delegates that, together, they had broadened the horizons of their work with the discussion on decent work and the social and solidarity economy. He added that by working together they had succeeded in strengthening the framework of fundamental principles and rights at work by including health and safety at work.

More than 4,000 delegates, representing Governments, Workers’ and Employers’ Organizations from 177 ILO Member States, attended the 110th ILC. The Conference, sometimes called the World Parliament of Labour, was held in hybrid format, between 27 May and 11 June, with the in-person component taking place in Geneva, Switzerland.