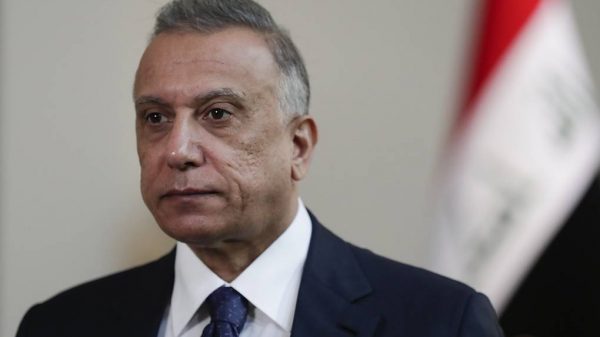 Iraq’s Prime Minister Mustafa Al-Kadhimi
has said that the country’s authorities know the names of those who carried
out an attack against him early Sunday and vowed that they would be
apprehended in the near future.

“We will pursue those who committed yesterday’s crime. We know them well
and we will expose them,” he said, according to a statement from the prime
minister’s office. “There are those who are trying to tamper with Iraq’s
security and want it to be a gang state, but we will not let this happen.”

Al-Kadhimi said that certain forces in Iraq were opposed to the ongoing
democratic change and struggle against corruption.

He stressed, “We prevented Iraq from slipping into a regional war and were
able to take the country to safety. We fought corruption, and we will not
stop pursuing the corrupt. They will not escape justice.”

The assassination attempt against Iraq’s prime minster took place in the
early hours of Sunday. Al-Kadhimi’s home in Baghdad’s tight security Green
Zone, where foreign embassies and government offices are located, was
attacked by bomb-laden drones. AL-Kadhimi said in Twitter he remained unhurt.

According to the television broadcaster Al-Arabiya, the drones were
launched from Baghdad’s northern suburb approximately ten kilometers away
from the “green zone.” At least seven people were injured in the attack.