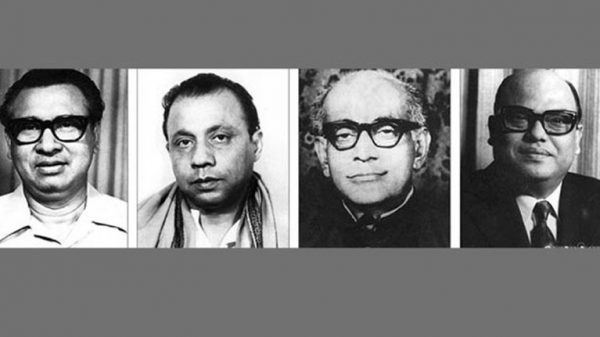 The assailants of the August 15, 1975 carnage with supports of their political patron Khondker Mostaq Ahmed gunned the four captive leaders and four top associates of Father of the Nation Bangabandhu Sheikh Mujibur Rahman.

Their goal was visibly to expose Bangladesh to extreme wilderness after killing Bangabandhu along with most of his family members and toppling his post-independence government.

History suggests two units of Bangladesh Army’s tank and artillery regiments staged the August 15 carnage and the subsequent jail killing while the later episode which came as a counter coup was waged to discipline the culprit leaders of these units.

In face of the global pandemic coronavirus (COVID-19), the Jail Killing Day this year was observed across the country through various programmes maintaining the health guidelines.

Awami League (AL) and its associate bodies as well as different organizations observed the day in a befitting manner through daylong programmes.

AL’s daylong programmes started with lowering the national and party flags at half mast and hoisting black flag at Bangabandhu Bhaban and Awami League offices across the country, including its central office, at the dawn today as a mark of respect to the martyrs of November 3, 1975.

Around 8:30 am, AL General Secretary and Road Transport and Bridges Minister Obaidul Quader paid homage to Father of the Nation Bangabandhu Sheikh Mujibur Rahman on behalf of Prime Minister Sheikh Hasina by placing a wreath at the portrait of Bangabandhu in front of Bangabandhu Memorial Museum at Dhanmondi-32 in the city.

As part of the party programme, Obaidul Quader along with senior leaders placed wreath at the grave of Shaheed of August 15 and the national four leaders at Banani.

He paid homage at the grave of Shaheed of August 15 and to Syed Nazrul Islam, Tajuddin Ahmed and Captain M Mamnsur Ali on behalf of Prime Minister Sheikh Hasina first and later with party leaders.

The AL leaders also offered fateha. A milad mahfil and special munajat were also held there.

To mark the day, a discussion was held at AL central office in the city’s Bangabandhu Avenue area around 11 pm with Awami League Presidium Member Begum Matia Chowdhury in the chair.