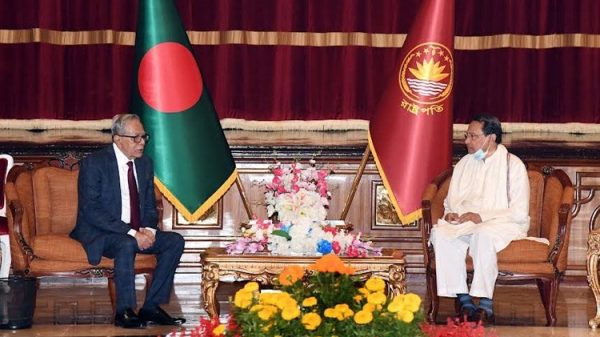 A six-member Jasad delegation, led by its chief Hasanul Haque Inu, MP,
came up with the proposals during a talk with President M Abdul Hamid at
Bangabhaban here in the afternoon.

The dialogue lasted for about an hour from 4 pm.  At the end of the
dialogue, Inu told reporters that they had placed a number of specific
proposals to the President.

He said according to Article 118 of the Constitution, the President has the
authority to form the Election Commission and “We highly appreciated

the initiatives of the President

for initiating discussions with other political parties to form an
acceptable EC.”

Inu said the government usually faces an awkward situation every five
years with the formation of the Election Commission. So, the enactment of a
permanent law can resolve the issue.

On the other hand, Inu said the President could advise the government
to form an inquiry committee.

In that case, members from the country’s constitutional bodies should be
included in the committee, he said, adding that it is necessary to include
people, who have honesty, integrity and acceptance.

He also mentioned that the individuals with the status of Appellate
Division Judges and Comptroller and Auditor General can be chosen in this
regard.    The formation of an election commission was not enough for a free,
fair and credible poll, the Jasad chief said, adding “It is necessary to
ensure that the government’s executives extend all-out cooperation to the EC
properly.”

After the dialogue, President’s Press Secretary Md Joynal Abedin told BSS
that the President held talks with one of the opposition parties in Jatiya
Sangsad at Bangabhaban on the second day over the formation of an
independent, neutral, acceptable, strong and effective Election Commission.

Welcoming the Jasad delegation at Bangabhaban, the President said there
was no specific law for forming the Election Commission.   Therefore, he
hoped that all political parties would play a very positive role in forming
an acceptable EC.

The head of state sought the full cooperation of all the political parties
in this regard.

On Monday last (December 20), President Hamid held a talk with the main
opposition party of the parliament Jatiya Party.

The President will also hold a dialogue with Bangladesh Workers Party on
Tuesday (December 28) at 4 pm.

Talks with Bangladesh Nationalist Front-BNF and Islamic Oikya Jote will
be held respectively at 4 pm and at 6 pm on Wednesday (December 29).

However, no date has yet been set for talks with other political parties.

Secretaries concerned to Bangabhaban were also present there.

Earlier, talks were held with the participation of political parties ahead
of the ninth, tenth and eleventh parliamentary polls.

In the last few terms, the President has formed the Election Commission
on the basis of the recommendations of the ‘Search Committee’.

The current EC’s five-year term will expire on February 14 next year.

During this period, the President will form a new commission, under which
the 12th parliamentary elections will be held.