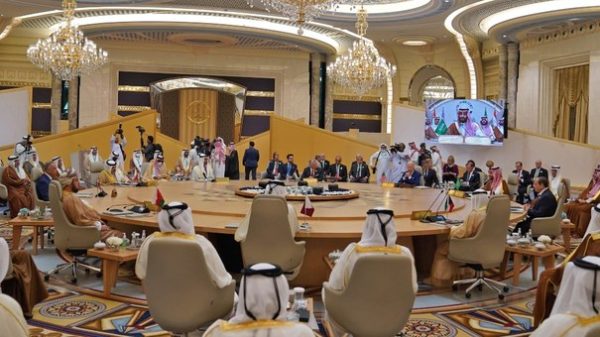 The Jeddah Security and Development Summit concluded on Saturday at the King Abdullah International Conference Center with Saudi Arabia saying it did not have any additional capacity to increase oil production beyond 13 million barrels per day.

During the 30-minute bilateral meeting, leaders highlighted the joint efforts to strengthen partnerships between the GCC countries, as well as Egypt, Jordan, Iraq and the US.

The crown prince said: “The Kingdom has announced an increase in its production capacity level to 13 million barrels per day, after which the Kingdom will not have any additional capacity to increase production.”

He also addressed climate change, calling for a balanced mindset through a gradual transition towards sustainable energy sources.

“The environmental challenges that the world is currently facing, especially climate change, and the international community’s determination to maintain the Earth’s temperature in accordance with the levels set by the Paris Agreement, require dealing with them realistically and responsibly,” he said.

This would achieve sustainable development, through a “balanced approach” and a “gradual and responsible transition towards more sustainable energy sources, which takes into account the circumstances and priorities of each country,” he added.

The crown prince said that to reach net neutrality on carbon emissions, Saudi Arabia is following the circular carbon economy approach, in line with its development plans. The Crown Prince said that it is enabling its economic diversification, without affecting growth and supply chains, to address emissions through the Green Saudi initiatives and the Green Middle East initiative.

“We hope that the summit will establish a new era of joint cooperation to deepen the strategic partnership between our countries and the United States of America to serve our common interests and enhance security and development in this vital region for the whole world,” he said.

He also called on Iran to be cooperative and not interfere in regional affairs, during his opening remarks at the summit.

US President Joe Biden followed the Crown Prince’s speech by affirming that the US would remain an active and engaged partner in the Middle East.

“For the first time since 9/11, an American president is visiting this region without American troops being engaged in combat and a combat mission in the region,” he said.

“To rebuild trust and deliver real results, and we will operate in the context of the Middle East as it is today, a region more united than it has been in years, the GCC is the prime example of that. The former rivals re-establish diplomatic and economic ties, new memberships are being forged, and increasingly the world is seeing the Middle East through the lens of opening an opportunity.

“Let me state clearly the United States is going to remain an active engaged partner in the Middle East. As the world grows more competitive and the challenges we face more complex, it is becoming clear to me how closely interwoven America’s interests are with the success of the Middle East,” he said.

The crown prince said that the major challenges that the world had recently faced — due to the COVID-19 pandemic and the geopolitical situation — had required a more concerted international effort to recover the global economy and achieve food and health security.

“The environmental challenges that the world is currently facing, especially climate change, require dealing with them realistically and responsibly to achieve sustainable development by adopting a balanced approach through a gradual and responsible transition toward more sustainable energy sources,” he said.

He also said that the growth of the global economy was closely linked to making use of all available energy sources, including hydrocarbons, while controlling their emissions through clean technologies.

“The Kingdom has adopted a balanced approach to achieving zero carbon neutrality, by following the circular carbon economy approach in line with its development plans and enabling its economic diversification,” he said.

During the summit, King Abdullah II of Jordan said: “Here we have to reaffirm the importance of reaching a just and comprehensive solution for the Palestinian cause on the basis of the two-state solution.”

He added: “There is no security, stability and prosperity in the region without a solution that guarantees the establishment of an independent Palestinian state on the lines of June 4, 1967, with East Jerusalem as its capital, to live in peace and security next to Israel.”

Abdel Fattah El-Sisi of Egypt said: “It is no longer acceptable to have among the sons of our Arab nation one who is a refugee or a displaced person or affected by the scourge of wars and disasters. It is time for our efforts to join forces to put an end to all conflicts.”

The crown prince concluded: “We are optimistic that the summit will lead to setting up a comprehensive framework for a new stage in which we will send hope to the young men and women of the region with a bright future in which they will be able to realize their hopes and present to the world our noble message and values that we are proud of and will not abandon. And we hope the world respects them.”