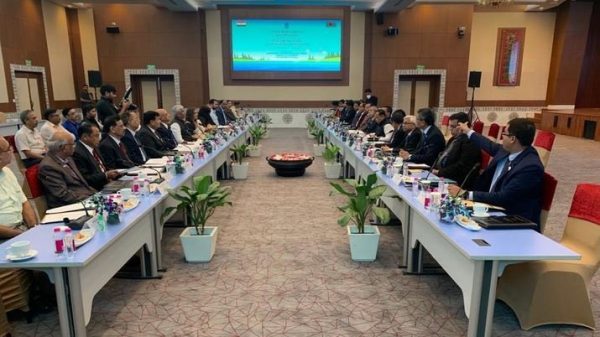 Larger issues of cooperation on river  resources and river-related issues were discussed during the ministerial- level meeting of the Bangladesh-India Joint River Commission (JRC) concluded  here this afternoon.

Beginning at around 1:00 pm, the formal ministerial-level meeting of the JRC continued till 3:30 pm at Sushma Swaraj Bhaban here, sources said.

Sources, preferring not to be quoted, said that issues relating to the
Kushiyara river, sharing of data on the flow of water in the rivers flowing
in India’s North-East region and Teesta issues were discussed, among others.

The issues relating to the renewal of Ganges water sharing treaty was
prominently discussed in the meeting.

The 38th Meeting of the India-Bangladesh Joint Rivers Commission, led by the Water Resources Ministers of respective countries held today in New Delhi, India. The meeting was held after a gap of twelve long years. The last meeting was held in 2010.

The JRC meeting, held in a cordial and friendly atmosphere, discussed the whole gamut of the issues related to the common rivers between the two countries specially the Ganges, Teesta, Manu, Muhuri, Khowai, Gumti, Dharla, Dudhkumar and Kushiyara. Apart from this, exchange of flood related data and information, river bank protection works, common basin management, and also Indian River Interlinking Project were discussed in detail. The JRC meeting agreed to undertake some more common rivers for exchange of data and information towards preparation of the draft framework of interim water sharing agreement.

Bangladesh side requested for conclusion of the long pending Teesta Water Sharing Treaty at an early date. The Indian side assured of their utmost efforts in concluding the agreement. The State Minister of Bangladesh requested the Indian counterpart for his support in signing the MoU for withdrawal of water by Bangladesh and India from the common stretch of Kushiyara river at an early date. The Indian Minister assured that the issue is under their active consideration.

Both sides agreed to conduct the feasibility study for optimum utilization of water received by Bangladesh under the provision of the Ganges Water Sharing Treaty, 1996. Prior to this Ministerial Level JRC Meeting, a Secretary  Level Meeting was held on 23rd August, 2022.