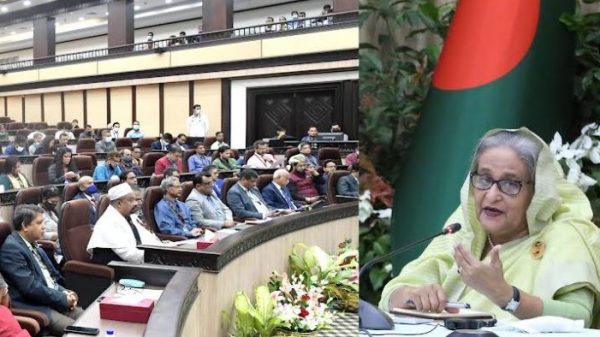 Prime Minister Sheikh Hasina said today the law would decide whether Khaleda Zia would be allowed to go abroad for medical treatment.

“I have done whatever I can for Khaleda Zia. Now the law will decide the next course of action (regarding Khaleda’s overseas treatment),” she said while answering queries from the journalists in a press conference arranged to brief media about her recently concluded 14-day official visit to the UK and France.

Replying to a query about allowing Khaleda Zia to go abroad for treatment, she said that using her power, she has allowed Khaleda Zia to stay home (instead of jail) and take required treatment within the country.

The Prime Minister briefed the media at the Ganabhaban end while the journalists from different media questioned her from both her official residence and the Prime Minister’s (PMO).

Sheikh Hasina asked the journalists how they could expect from her that Khaleda Zia will be sent abroad for treatment as the BNP chairperson made several attempts on her life, referring to the August 21, 2004 grenade attacks, planting of bombs at Kotalipara in Gopalganj and giving prestigious postings to the killers of Bangabandhu and his family members.

The Prime Minister said Khaleda Zia made convicted killers Rashid leader of the opposition in parliament and gave another killer Pasha posthumous promotion to give his family all the job benefits.

She added that Khaleda Zia even did not allow the Awami League to speak about the August 21 grenade attack in the parliament though 22 leaders and activists were killed and many others injured.

The Prime Minister questioned the journalist what they would do if anyone made attempts on their live or killed their family members, saying, “Would you receive them with garland?”

She told the journalists who asked the questions that they must be ashamed for asking the question.

Despite those facts, the Prime Minister said, they have allowed Khaleda Zia to stay home as they are human beings.

“Using whatever (authority) is in my hand, I have managed to keep Khaleda Zia at her home,” she said.

Replying to another question, Sheikh Hasina said they (BNP) have been carrying out anti-state conspiracy mainly to dethrone Awami League government as it has ensured development at the grassroots which they could not appreciate.

The Prime Minister said the BNP-Jamaat clique has made several attempts to kill her by hurling bombs and grenades and firing gunshots.

“They could not succeed in killing me despite their many attempts. Their attempts will be continued and they are doing so. This is their character,” she added.

The Prime Minister said they came to power illegally through guns and their party was formed from the cantonment.

Being a fugitive convict, Tarique Rahman has been carrying out activities to destroy the country’s image and there are some people who are always busy with conducting anti-state propaganda for money.

The premier said that Tarique Rahman has been leading lavish life (in London) with the country’s huge siphoned off money.

She said they have been trying to create an anarchic situation in Bangladesh through many unprecedented activities, including included hurling bombs and keeping the holy Quran in the Hindu temple.

The Prime Minister asked the journalists find out who are controlling the untoward incidents and from where the instructions are coming.

Taking the advantage of digital Bangladesh, she said, things are found out by reviewing the close-circuit cameras.

“More information will come out,” she asserted.