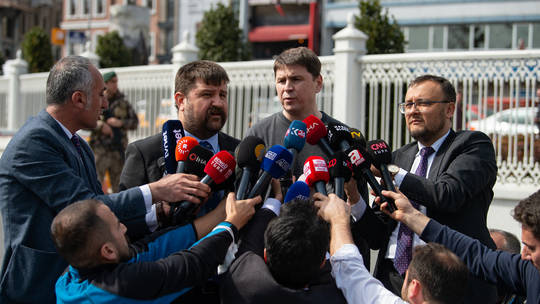 Ukraine didn’t stage the attack because it’s not a “terrorist state,” an aid to Zelensky said.
Kiev has nothing to do with the assassination of Darya Dugina, the daughter of Russian political commentator and philosopher Alexandr Dugin, an aide to Ukrainian President Vladimir Zelensky said on Sunday.

Speaking on national television, Mikhail Podoliak said that his country is not “a terrorist state,” an apparent response to suspicion voiced by officials that Kiev might be behind the bombing.

“I want to stress out that Ukraine, of course, has nothing to do with this, because we are not a criminal state, unlike Russia, and especially not a terrorist state,” he noted.
Podoliak also indicated that the killing of Dugin’s daughter is “a testament to the ongoing struggle for power and influence among various groups in Russia.”

Moreover, he did not rule out that Russia could use the blast as an excuse for announcing a large-scale mobilization amid the military offensive in Ukraine. Moscow has denied all claims it plans to do so, castigating such speculation as “bogus stories.”

Podoliak’s comments came after Denis Pushilin, the leader of the Donetsk People’s Republic, accused the “terrorists of the Ukrainian regime” of carrying out the bombing. However, Russian Foreign Ministry spokeswoman Maria Zakharova did not pin the blame on Kiev but noted that if investigators determine that Ukraine is indeed responsible, this “would be the case of state terrorism policies carried out by the Kiev regime.”

Dugina was killed Saturday night outside Moscow when the SUV she was driving was ripped apart in an explosion. According to Russia’s Investigative Committee, the blast was caused by a bomb that had been attached to the underside of the vehicle. Investigators believe the attack to have been premeditated and to be a contract job.

Earlier on Saturday evening, Aleksandr Dugin was giving a lecture at a family festival called ‘Tradition’ in Moscow Region. Dugina was in attendance at the event. Several reports say Dugin initially planned to leave the festival with his daughter but later decided to take a separate car, while Darya took his Toyota Land Cruiser Prado.

Dugin is known for his staunch anti-Western and ‘neo-Eurasian’ views. Western media has portrayed him as a driving force behind key aspects of President Vladimir Putin’s foreign policy. However, despite his reputation in the West, in Russia he has never enjoyed official endorsement from the Kremlin and is largely considered a marginal figure.