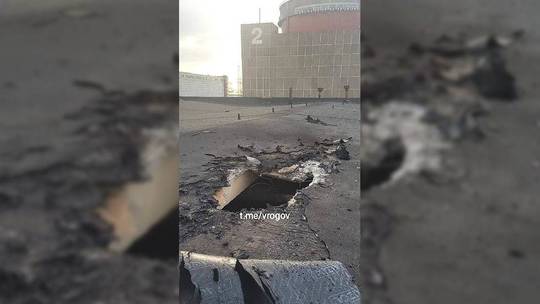 The roof of the building was damaged in the attack, Zaporozhye Region’s administration says.
A Ukrainian strike has hit a reactor fuel storage at the Russian-controlled Zaporozhye nuclear power plant, local authorities said on Monday.

The roof of the building has been damaged as a result of the attack, Vladimir Rogov, the spokesman for Zaporozhye Region’s administration, said on Telegram.

He also posted a photo of a hole in the roof that was supposedly caused by the strike.

The affected storage facility holds fresh nuclear fuel for the reactors of the plant, which is the largest in Europe.

Russia said earlier that a Ukrainian drone targeting the nuclear facility had been shot down.

Moscow has repeatedly accused Kiev’s forces of targeting the Zaporozhye nuclear power plant – which has been under Russian control since March, but operated by Ukrainian staff – with artillery and ‘kamikaze’ drones.

It warned that those attacks could trigger a disaster that would eclipse the 1986 Chernobyl incident. Radioactive material could potentially reach Poland, Slovakia, Romania, Moldova, Belarus, and even Germany in a worst-case scenario.

Ukraine, meanwhile, has claimed that the Russian forces have turned the nuclear plant into a military base and that they’ve been shelling the facility themselves to pin the blame on Kiev.

Russia has repeatedly denied those accusation and urged for international inspectors to visit the site to assess the situation for themselves.

Earlier on Monday, International Atomic Energy Agency head Rafael Grossi announced that such a mission will take pace after all, with IAEA specialists expected to arrive at the Zaporozhye plant this week.