KSA ready to contribute to reach a political solution to the Ukrainian crisis: Prince Faisal 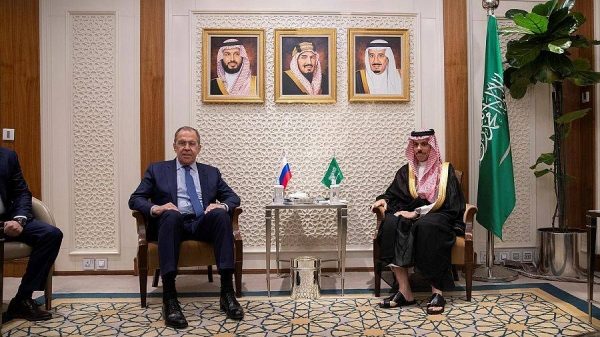 KSA ready to contribute to reach a political solution to the Ukrainian crisis: Prince Faisal

Prince Faisal affirmed to his Russian counterpart the Kingdom’s firm position based on international law, pointing to Saudi Arabia’s support for the efforts that aimed at reaching a political solution, which will end the crisis in Ukraine and achieves the security and stability in the region.

“Saudi Arabia is ready to make the necessary efforts to contribute to reaching a political solution to the crisis in Ukraine,” Prince Faisal confirmed.

The two sides also reviewed, during the meeting, the Saudi-Russian bilateral relations and ways to enhance them, as well as their exchange of views on the latest developments in the region and the world and the efforts exerted towards them.

It is noteworthy that the Russian Foreign Minister Sergey Lavrov arrived in Saudi Arabia coming from Bahrain for a two-day official visit on Tuesday.