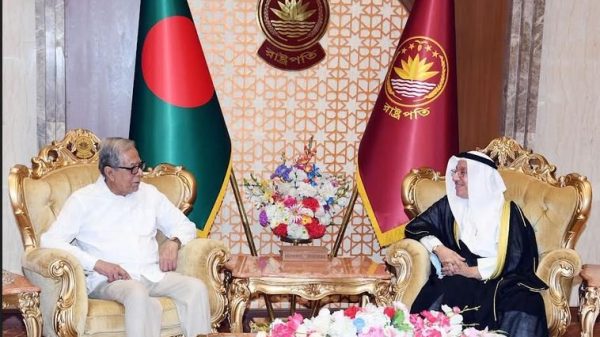 During the meeting, President Hamid said Bangladesh attaches utmost importance to its relations with Kuwait.

Noting the existing excellent bilateral ties between the two countries, he hoped that these relations would further strengthen in the days to come.

The Head of the State stressed on the joint initiatives at government and private levels to increase trade and investment between the two countries.

He thanked the Government of Kuwait for providing free COVID-19 vaccine and treatment to Bangladeshi expatriates in Kuwait.

He thanked the Kuwaiti government for providing humanitarian assistance to the Rohingyas, who fled away from their ancestral land, being the worst victims of the military atrocities at Rakhine state of Myanmar.

Kuwait would play a stronger role in resolving this issue, the President hoped.

He also thanked the outgoing Ambassador for his successful discharge in Dhaka.

The outgoing envoy expressed his gratitude to the President for providing his overall cooperation during his assignments in Bangladesh.

President’s Office Secretary Sampad Barua and other senior officials, among others, were present.