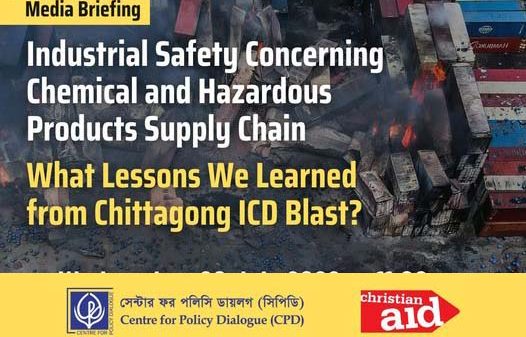 Chemical Handling laws, rules and provisions are required to be summed into a framework in Bangladesh, said Dr Golam Moazzem.

He suggested for a separate chemical handling framework apart from import and export authorities because it is now included among different authorities like Inland Container Depots (ICDs), National Board of Revenue (NBR), Customs, Fire Service and Civil Defense (FSCD), Department of Environment ( DoE) , Department of Inspections for Factories and Establishments (DIFE), Boiler Authority and Bangladesh Navy.

The researcher had also suggested for developing safety protocol for both import and export of hazardous chemicals for Bangladesh.

Besides, he emphasized on continues factory monitoring, strict process and handling inspections and coordinated actions from authorities.

Operation of the coordination committee needs to be regular and effective as well, recommend by Dr Khondaker Golam Moazzem, Research Director, Centre for Policy Dialogue (CPD).

Such recommendations were derived from a media briefing organised by CPD on Wednesday at its city office titled “Industrial Safety in International Trade of Chemicals and Dangerous Goods: Experience of Chittagong Inland Container Depot (ICD) Accident”.

On June 4, 2022, a terrible fire incident happened at the container depot in Sitakunda, Chittagong.

As a result, the issue of industrial safety in the international trade of chemicals and dangerous goods is widely discussed in various circles.

These recent fire accidents are causing loss of life and also damage to property.

As a result, the development of emerging industries in the country is being questioned in various ways.

The post-industrialization of the country is increasing the use of chemicals and hazardous products. Along with this, the issue of industrial safety needs to be given equal importance.

There are institutional and operational weaknesses across the value chain of dangerous chemicals which need to be addressed.

These are related with licensing, registration, certification, renewal of those documents are often ignored, overlooked and avoided by the authorities and business community.

Regular inspection of these establishments is needed to be strengthened.

Laws, rules, regulations and guidelines are either unclear or non-specified in case of dealing with hazardous chemicals.

A comprehensive industrial safety framework for dangerous chemicals is required to be established.

Such a framework should cover the whole value chain including production, transportation, storage, shipment and delivery.

Necessary amendment of rules related to handling of these chemicals concerning all stages of the value chain need to be undertaken.

Assuring the safety and security at each stage of the value chain is time demanding.

Given the large number of authorities involve with different roles and responsibilities- a well coordination between these authorities have to be ensured.

Moreover, the concerned authorities appear to bypassing their due-diligence in ensuring compliances which caused the increasing risks in the hazardous chemicals international trade.

The compliances of the SOPs and failure to maintained compliances need to be immediately handled.

Officials dealing with the responsibilities need to be made accountable at every stage.

A detailed operational protocol need to be designed for the hazardous chemicals supply chain which needs to be maintained.

A central authority is needed to monitor the effective functioning of the laws, rules, protocol and other related compliances.

There were flaws of the BM Depot authority for the fire incident.

But it is needed to obtain a ‘red category’ license to store chemicals.

During availing the clearances, they flouted the directives in practice.

The probe committee members found a diesel pump in the compartment of the depot and the explosion could have been much more severe had the diesel pump caught fire.

The depot authorities did not take the approval for such a pump from the fire service.

It was learned that no such application was made to Bangladesh Petroleum Corporation either.

Not having adequate fire extinguishers and hydrants and automated power pump was noticed by the researchers.

Moreover, the safety protocol maintained by CPA with regard to hazardous chemicals seems to be inadequate.

Chattagram Port Authority (CPA) asked importers to get their hazardous chemicals released from the port within 72 hours of arrival but Chattogram port itself is not yet ready to handle dangerous goods.

CPA is planning to set up a warehouse for ‘imported’ The International Maritime Organization (IMO) listed goods.

IMO in 2016 informed the shipping ministry of the lack of proper compliance with the code in Bangladesh. The audit report of the International Maritime Organization is one of the 17 audit objections. They pointed out that Bangladesh is not following the IMDG code properly.

The IMO suggested the shipping authorities form a committee to oversee the implementation of the codes. But this proposal saw no headway in five years. The license of BM Depot was renewed on two instances in 2016.

On both occasions, the depot authorities applied for license renewal after it expired.

The depot authorities in 2020 applied for renewal after 3 months and 16 days of expiry.

The customs authorities served a show-cause notice for the delay and the depot authorities got their license renewed upon a commitment that they would not make the same mistake again.