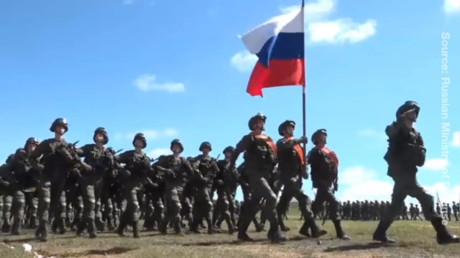 China and India are among the 13 foreign participants in the Vostok 2022 war games.

International military drills have been launched in Russia’s Far East, with countries including China and India taking part. The US has voiced concern over Moscow’s ability to get other nations to participate in the exercises.

The opening ceremony of the Vostok 2020 strategic exercises took place at a military range in Russia’s Primorsky Region on Wednesday, the Defense Ministry reported. Russia holds drills of this type annually, with the country’s military districts rotating each year as hosts. This year, the Eastern Military District welcomed 13 foreign nations, which accepted Russia’s invitation to send troops or military observers.

Russian Deputy Defense Minister Yunus-Bek Yevkurov, who represented the host nation at the ceremony, said the wide participation and scale of the exercise made it exceptional and demonstrated “the increased role and importance of joint training of our armed forces.” Leaders of other delegations stressed in their speeches that the event was strictly defensive in nature.

Footage from the scene shows soldiers from participating nations marching as a military band plays. The list of foreign guests includes Azerbaijan, Algeria, Armenia, Belarus, China, India, Kazakhstan, Kyrgyzstan, Laos, Mongolia, Nicaragua, Syria, and Tajikistan. Nine of them sent troops to participate in the maneuvers portion of the exercises.

Vostok 2022 includes war games for staff officers and field exercises for troops, as well as naval and aerial training. According to the Russian Defense Ministry, over 50,000 soldiers and officers and more than 5,000 pieces of heavy military equipment, including some 140 aircraft and 60 navy ships, will be taking part in the week-long exercise, which starts on Thursday.

The US has expressed concern over the event. During a daily briefing on Tuesday, White House Press Secretary Karine Jean-Pierre said Washington has reservations about “any country exercising with Russia while Russia wages an unprovoked, brutal war against Ukraine.” When pressed, she declined to say whether the US would retaliate against participants, particularly India, for sending its troops to Russia.