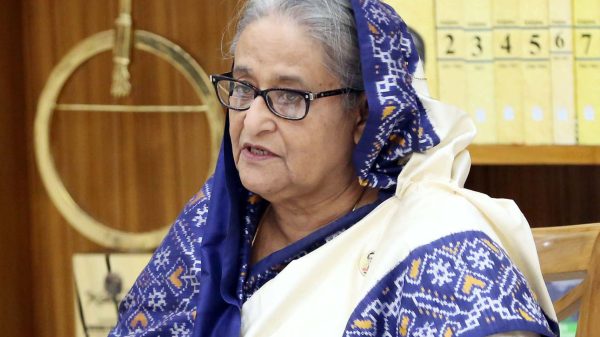 “I am happy to announce the visit of Bangladesh Prime Minister Sheikh Hasina to India”. It will be a state visit from September 5-8 this year,” said MEA Spokesperson Arindam Bagchi here this evening.

Speaking at the weekly media briefing, he said during the visit, PM Sheikh Hasina will pay a call on President of India Droupadi Murmu and Vice President Jagdeep Dhankar. She will hold bilateral consultations with Prime Minister of India Narendra Modi.

Besides, he said External Affairs Minister Dr. S. Jaishankar will call on Prime Minister Sheikh Hasina. During her three-day state visit, the premier is likely to visit Ajmer Sharif.

Bagchi said in recent years, Bangladesh and India have sustained high level of engagement including the highest level of visits between the two countries.

“The forthcoming visit of Prime Minister Sheikh Hasina will further strengthen the multifaceted relationship between the two countries based on historical and cultural ties and mutual trust and understanding,” he added.

Meanwhile, diplomatic, business and journalist fraternities see the PM Sheikh Hasina’s upcoming India visit as a very crucial one in the perspective of present world scenario.

Taking to BSS, they said the visit will yield a very positive outcome and usher a new era of bilateral and regional cooperation in the wake of present global geo-political developments. The visit will also re-invigorate India’s investment in Bangladesh, they said.

Bangladesh Prime Minister Sheikh Hasina is scheduled to arrive in New Delhi on September 5 on a three-day official visit at the invitation of her Indian counterpart Prime Minister Narendra Modi.

During her visit, she will hold bilateral talks with Narendra Modi and is expected to join a series programmes including inauguration of first unit of 660 MW Rampal power plant, addressing Indian business community and other dignitaries.

Ahead of her visit, former diplomats, businessmen and journalists from both countries talked to BSS about the outcome of the visit.

They expressed optimism that the visit would further bolster bilateral and regional cooperation and re-invigorate Indian investors to invest in Bangladesh.

These would definitely help solve many outstanding issues between the two countries and would bring India and Bangladesh much closer compared to any time in the past, they added.

“I am very much optimistic about the visit as it is happening at a time when tension has been prevailing across the world. The meeting of the two PM’s will create an opportunity to discuss domestic, regional and global issues, so it will be a very crucial visit,” said former Bangladesh Foreign Secretary M. Shahidul Haque.

“I think discussion on these crucial issues by the two leaders will put impetus to enhance cooperation between the two neighbours,” said Haque who is currently holding the Bangabandhu chair at Delhi University in India.

Asked about the finalization of Comprehensive Economic Partnership Agreement (CEPA), he said once it is signed, it will play a pivotal role in further increasing bilateral trade and investment to a great extent.

Meanwhile, India’s former foreign secretary Harsh Vardhan Shringla expressed high hope about the outcome of the upcoming visit of Premier Sheikh Hasina to India, saying, “The visit will usher in a new era of cooperation between the two countries”.

About CEPA, Shringla, who is currently holding the position of Coordinator for G-20 Summit of India, said if the CEPA is finally signed, Bangladesh’s gross domestic product or GDP could go up by nearly 1.5 per cent. “India will also get much benefit from the move,” he said.

He also said the upcoming visit of Sheikh Hasina to India would be a very successful one.

Director General of Confederation of Indian Industry (CII) Chandrajit Banerjee said Sheikh Hasina’s India visit will further the momentum of the already growing India Bangladesh economic ties, which has been growing steadily over the years and has crossed the landmark of USD 18 billion in 2021-22 despite the challenges posed by the Covid-19.

He said enhanced trade and transport connectivity between India, Bangladesh and neighboring countries can be a game changer for the entire region.

Banerjee said the visit is also expected to re-invigorate the Indian investors.

With the operationalization of the Indian economic zones, greater Indian investment is expected to flow into Bangladesh, he expected.

Regarding CEPA, he said as Bangladesh transitions from LDC status, “this Agreement is expected to provide a basis for preferential trade to continue between the two countries”.

Veteran journalist and former President of Foreign Correspondents Club (FCC) of South Asia S. Venkat Narayan said the people of India are eagerly waiting to welcome Sheikh Hasina here as she is considered as a closest friend of the country.

He said her (Hasina’s) India visit would be a “grand success” as it will help India-Bangladesh bring much closer compared to any time in the past.

When asked about the long pending Teesta water sharing agreement, he opined that the West Bengal government should withdraw restrictions in signing the deal soon.

Venkat, who is the South Asia Bureau Chief of Australia’s Network Seven TV Channel, said Bangladesh and India have been sharing 54 common rivers, so Bangladesh has the legitimate right to get due share of water from those rivers.

“So, Teesta deal should be signed soon,” he hoped.

In this connection, he referred to finalization of Teesta Water Sharing Agreement during the then India’s Prime Minister Manmohan Singh’s visit to Bangladesh in 2011 and said “good sense would prevail to Mamata to pave the way for signing of the deal”.

The agreement on Teesta Water Sharing was put on hold when West Bengal Chief Minister Mamata Benarjee showed her restrictions at the final stage of signing the deal.

Ahead of the PM’s visit, the ministerial level meeting of Joint River Commission (JRC) between Bangladesh and India was held on August 25 in New Delhi after a long gap of 12 years.