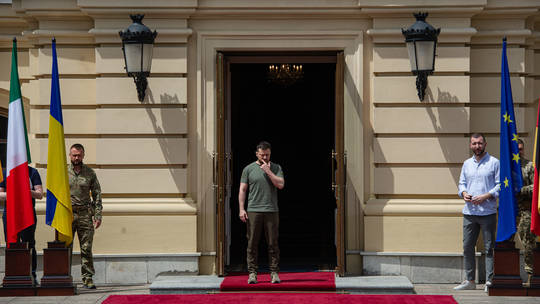 The president’s admission that he willingly failed to signal a looming Russian attack has “punctured the bubble” of his image.
Many Ukrainians have been infuriated by an admission, from President Vladimir Zelensky, that he concealed news of the imminent Russian special military operation last spring.

That’s according to the Washington Post, where he made the revelation earlier this week. Zelensky’s disclosure that he sacrificed lives to avoid ruining the economy was his first serious communication blunder since the conflict began, the paper said.

Before Zelensky seemed “beyond reproach, a national hero” to Ukrainians, the publication said, but the acknowledgment has “punctured the bubble, triggering a cascade of public criticism unprecedented since the war began.”

In the interview, Zelensky admitted that prior to the outbreak of hostilities with Russia, he was downplaying US warnings about a looming attack out of fear Ukrainians would flee the country en masse.

“If we had communicated that … then I would have been losing $7 billion a month since last October,” he said. Zelensky claimed that this deception of his own people prevented Russia from capturing the country in three days.

In late January, Zelensky promised Ukrainians a peaceful year, stating that people would be cooking barbeque during the May holidays, like they always do. The statement came days after he met with CIA Director William Burns, who reportedly laid out in detail Russia’s military plans.

Many ordinary Ukrainians and public figures were angered, seeing their president apparently not trusting them to handle the truth. Ukraine could have prepared for the fighting far better, stocking up on food and updating civil defense infrastructure and saving many lives that were lost, critics argued. Some questioned Zelensky’s motives in not informing the public.

“He didn’t want to put the country on a military footing because he was afraid of losing power,” journalist Bogdan Butkevich wrote on social media, as cited by the Washington Post.

Some of Zelensky’s supporters argued that people could have listened to American officials, who delivered public warnings about the Russian threat, instead of trusting their president, the article read.

The newspaper ended the piece with remarks from a Ukrainian woman, who said people should not discuss Zelensky’s admission until after the conflict is over.

“Ukraine is winning because of our belief in the president and our armed forces,” she was cited as saying. She believes that Zelensky would face accountability for his action afterwards, because “this is the society we are fighting for.”