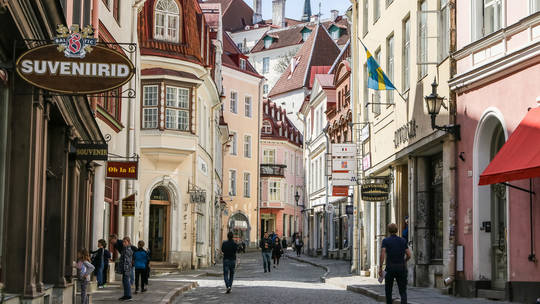 As part of sanctions against Russia over its offensive in Ukraine, Estonian Prime Minister Kaja Kallas said visiting Europe is “a privilege, not a human right” for tourists, and urged the EU to bar Russians from receiving Schengen visas.

On Thursday, Tallinn confirmed it would close its borders to Russian nationals with Schengen visas issued by the Baltic nation, starting next week. In an interview with Russian-language TV Channel ETV+, Toom called the move “absurd.”

The MEP explained that as Estonia “cannot make decisions for the entire Schengen area” and has no right to ban Russians with visas issued by other Schengen states, the only thing Tallinn can do is to effectively invalidate its own visas.

“I think we look a little weak-minded in this, but nevertheless this is the idea,” the MEP said.

She said the Estonian authorities are now trying “to push through the European Council” the idea of a total Schengen ban for Russia, but in her opinion, “the idea is not pushable.”

“Because there is a legislative definition of the sanctions regime, it has goals, stated goals, such as to maintain or restore peace, maintain democracy, and so on, I just can’t figure out in my small head how a ban on entry for Russians will restore peace in Ukraine. It just doesn’t fit in my head,” Toom said.

The politician added that she sees no logic in her government’s push to “kick out” some groups of Russians living in Estonia, by halting the issuance of residence permits.

“A lot of people came to us. We say that we condemn Putin’s regime, that you should not live there with this, and when people leave, we throw them back. There is absolutely no logic here,” the European Parliament member said, adding that there is no explanation for such initiatives other than the politicians’ wish to get more votes.

The MEP also warned fellow Estonians of the retaliation they can expect from Moscow.

“It all has another side, there will be reciprocity, we will not get to Russia. And one thing is that we are missing is St Petersburg and the Hermitage, but we also have Pechory [an area in Russia’s Pskov Region] where many people own property, homes… we can now say goodbye to it,” she said.

On Thursday, a spokesman for UN Secretary General Antonio Guterres, when asked to comment on Tallinn’s initiatives, told journalists that while “countries have a right to implement their own visa policies,” the UN is against discrimination.

Despite numerous calls from Ukraine, Estonia, Finland and Poland to impose a complete EU tourist visa ban on Russians, Germany and the EU officials have been skeptical of the idea so far. German chancellor Olaf Scholz cited “very far-reaching sanctions” imposed on Russia and said that a visa ban would weaken their effectiveness “if it was directed against everyone, including innocent people.”

A spokeswoman for the European Commission, in turn, said that a total ban would be simply unlawful, as each application must be considered individually.