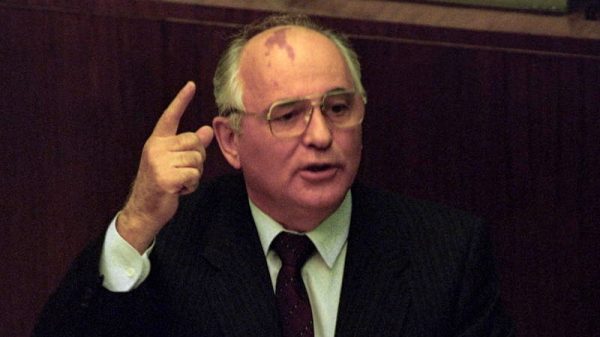 Mikhail Gorbachev, who ended the Cold War and was the last leader of the Soviet Union, has died at the age of 91, Russian news agencies reported, citing medical sources.

“Gorbachev died this evening after a serious and long illness,” the Central Clinical Hospital in Moscow said late on Tuesday, as quoted by the Interfax, TASS and RIA Novosti news agencies.

Gorbachev led the Soviet Union from 1985 until its collapse in 1991.

The dissolution of the Soviet bloc — marked by Gorbachev’s resignation that year — ended the Cold War and years of confrontation between East and West, freed Eastern European nations from Soviet domination, and established the modern Russian state.

Gorbachev’s death comes six months into Russia’s invasion of Ukraine, which has intensified tensions between Moscow and the West.

“[It’s] hard to think of a single person who altered the course of history more in a positive direction” than Gorbachev, Michael McFaul, a political analyst and former US ambassador in Moscow, wrote on Twitter. “Gorbachev was an idealist who believed in the power of ideas and individuals. We should learn from his legacy.” 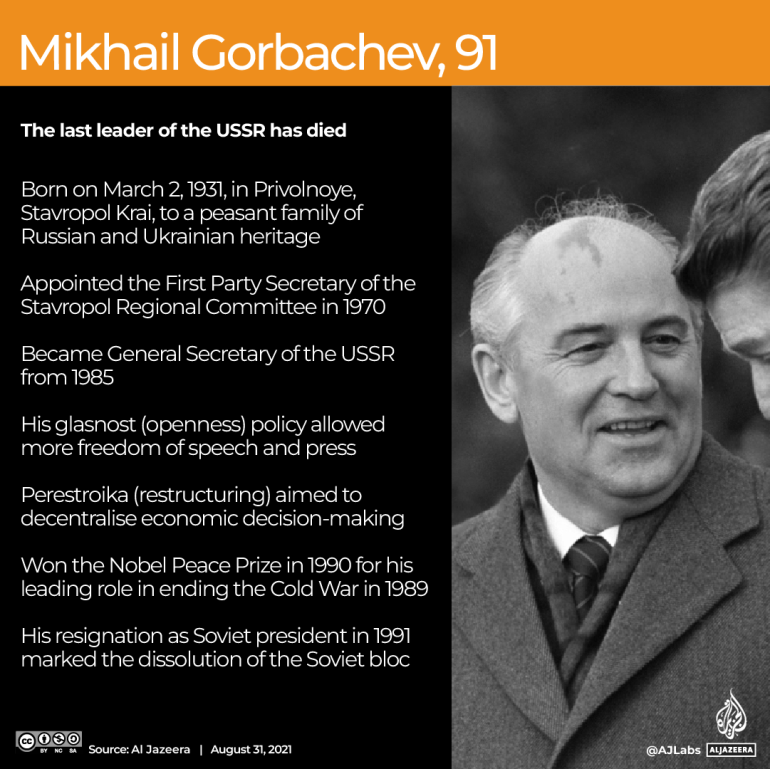 US President Joe Biden, who was a member of the Senate Foreign Relations Committee when Gorbachev was in office, described the former leader as a “man of remarkable vision”, saying he had the “courage” to “admit that things needed to change” after years of confrontation.

“As leader of the USSR, he worked with President Reagan to reduce our two countries’ nuclear arsenals,” Biden said in a statement. “After decades of brutal political repression, he embraced democratic reforms. He believed in glasnost and perestroika – openness and restructuring – not as mere slogans, but as the path forward for the people of the Soviet Union after so many years of isolation and deprivation.”

Gorbachev will be buried in Moscow’s Novodevichy Cemetery next to his wife Raisa, who died in 1999, state-owned TASS reported, citing a source familiar with the family’s wishes.

Born into a farming family in southern Russia, Gorbachev rose through the ranks of the Communist Party to become general secretary in 1985.

At the age of just 54, and the first leader from the post-Stalin generation, Gorbachev introduced a series of reforms that he hoped would reinvigorate the USSR and address its weaknesses.

He never wanted to dismantle the system, but glasnost and perestroika unleashed forces that proved impossible to control with calls for independence in the Baltic states and other parts of the Soviet Union as well as in Eastern Europe.

“He was a good man, he was a decent man. I think his tragedy is in a sense that he was too decent for the country he was leading,” said Gorbachev biographer William Taubman, a professor emeritus at Amherst College in Massachusetts.

Gorbachev refrained from using force — unlike his predecessors — as protests spread across Eastern Europe, but as the Soviet Union itself began to disintegrate, he struggled to prevent its collapse.

In one of the low points of his political career, he sanctioned a crackdown on the restive Baltic republics in early 1991.

“I see myself as a man who started the reforms that were necessary for the country and for Europe and the world,” Gorbachev told The Associated Press news agency in a 1992 interview shortly after he left office.

“I am often asked, would I have started it all again if I had to repeat it? Yes, indeed. And with more persistence and determination,” he said.

Gorbachev won the 1990 Nobel Peace Prize for his role in ending the Cold War, but many in Russia see him as responsible for the collapse of the Soviet Union and the social and economic crises that enveloped the country in the early 1990s.

“The Nobel Committee just doesn’t know what it’s like here … Let them spend a couple of months living like Russians and see how they feel,” an unnamed teacher told the Reuters news agency after Gorbachev received the Nobel Prize. “Is peace only for foreigners?”

Conor O’Clery, a Moscow correspondent for The Irish Times newspaper from 1991 to 1996, said Gorbachev became “embittered” after failing to keep the Soviet Union together and leaving office.

He ran for president in 1996 and received less than 1 percent of the vote.

“Gorbachev had become friendly with the West, was seen as a reformer in the West, but he did try to keep the Soviet Union together and he failed in that,”  O’Clery told Al Jazeera on Tuesday.

“He’s reviled today in Russia because he’s associated with the breakup of the Soviet Union and the end of the leading role that Russia had in the world.”

Despite his reputation at home, world leaders paid tribute to the changes that took place under Gorbachev.

European Commission President Ursula von der Leyen lauded Gorbachev on Tuesday, calling him a “trusted and respected leader” who “opened the way for a free Europe”.

“This legacy is one we will not forget,” she wrote on Twitter.