Mobilize internal resources and focus on poor so they can survive ‘crises’ : economists 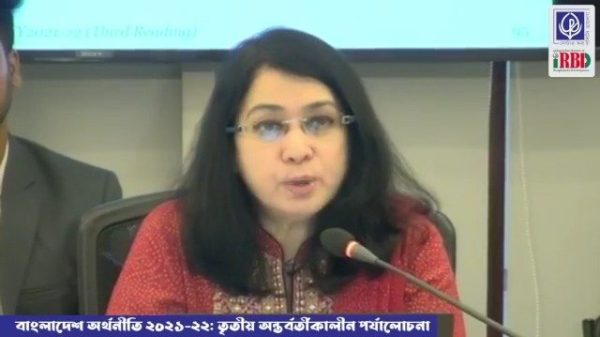 Mobilize internal resources and focus on poor so they can survive ‘crises’ : economists

Government must focus on increment of revenue earning and coordinate the foreign exchange policy in the upcoming budget of fiscal 2022-23, said Dr Fahmida Khatun.

Moreover, a realistic revenue generation policy along with foreign exchange policy formulation should be in focus of the budget, she continued.

Appropriate budget allocation, distribution and implementation for the sectors like health, safety net, education, social development, youth development, employment generation and industrial development need special attention in the upcoming budget by the formulators of the country, she emphasized.

She also mentioned, in the upcoming budget the government must have to ensure more sustainable employment generation for citizens’ of Bangladesh rather merely focusing on Gross Domestic Production (GDP) as a scale of national economic develop progress.

Moreover, government needs to assure market management and control inflation with fiscal and social initiatives for keeping price of essentials with in people reach.

Such observations were derived from a press briefing titled ‘State of the Bangladesh Economy in FY2021-22’ organized by Centre for Policy Dialogue (CPD) on Sunday as part of Independent Review of Bangladesh’s Development (IRBD) at its city office. 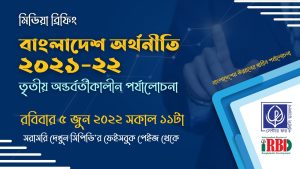 According the key note paper, Bangladesh economy is facing several challenges in the backdrop of global political and economic crises.

In the context of high inflationary pressure, deficits in trade and current account, exchange rate volatility, and pressure on foreign exchange reserve, macroeconomic management will be more challenging than ever before.

This will require prudent fiscal and monetary policies which will meet the demand for higher subsidies and incentives in a few critical areas, enhance domestic resource mobilisation, rationalise public expenditure to avoid unnecessary expenditures without dampening domestic demand, encourage private investment and ensure social protection to the poor.

According to the provisional estimates of BBS, GDP growth rate is expected to reach 7.2% – exactly same as the programmed figure of the budget for FY22.

The think tank unveiled that industry sector is expected to carry out the strong growth (10.4%) but Agriculture sector to attain the lowest growth in last six years (2.2%) even below the pandemic year of FY20.

A decomposition analysis of the provisional estimates of GDP growth indicates that Industry sector, more precisely the manufacturing sector, is expected to contribute to the attained growth.

Within the manufacturing sector, the large industry sub-sector is expected to lead with its largest contribution in last six years (for which the GDP estimates are available according to the new base year).

On a comparative scale, the contribution of Small, Medium and Micro Industry is expected to be weakened.

Revenue shortfall may reach approximately Tk. 30,000 crore in FY22. The revenue targets for FY23 should be set taking this into cognisance.

Operating expenditure owing to subsidies and interest payments is expected to rise in the later half of FY22 and the upward trend is likely to continue in FY23.

The budget surplus at the end of the first half of FY22 is not at all desirable, particularly when the economy is about to turn around from the COVID-19 induced shocks and ensuring utilisation of budgetary allocations is of paramount importance.

CPD suggested for a gradual depreciation of the BDT should be pursued with the help of the central bank’s sterilisation interventions.

A sharp depreciation may have adverse implications for import payments, consumer prices and foreign debt servicing.

Depreciation of BDT will also help incentivising export and remittances – hence, cash incentives will not be required.

In the short term, the expected deficit in the current account may be brought down by containing imports.

However, while Bangladesh did start to actively pursue a policy of depreciation, after exhausting its tool of dollar injection, it proved to be too late requiring the surgical operation of moving from managed float to free float.

This, under the circumstances, is a step in the right direction. There will be market correction in the USD-BDT exchange rate. However, as in 2012 there is a possibility of (reverse) correction once the foreign exchange market settles down.

In the short run, free float was likely to lead to deepening of imported inflation.

However, it is to be noted that Bangladesh was not being able to enforce its ‘managed float’ anyway in case of L/C openings and settlements and inter- Bank dollar market and also for export settlements and remittance flows.

So, the apprehension about ‘imported inflation’ could not be addressed in any way through the ‘managed float’.

In view of the adverse implications of imported inflation on consumer prices and purchasing power of fixed income earners, and to contain import demand, the GoB and BB have taken a number of steps:

Discourage import of luxury items through higher L/C margin and imposition of duties on selected items, on the one hand, and tariff rate adjustments (reduction of VAT and duties on essential commodities) on the other.

There is a need to coordinate Monetary Policy and Fiscal Policy, particularly in view of the upcoming FY 2022-23 budget.

To address the adverse impacts of imported inflation, in view of Budget FY 2022-23 the Government should go for (a) import duty adjustment, (b) improvement of market management (from import stage to retail, consumer and producer level, (c) use of strategic food stocks and OMS and (d) strengthening of SSNPs, particularly programmes for food distribution and cash transfer.

The economy is under pressure in view of the emergent challenges caused due to both external and domestic factors. These challenges are apprehended to be continued for some time as predicted by various international organisations in view of slower growth globally, including in some major economies.

This is worrisome for the overall macroeconomic situation in Bangladesh.

It requires proactive measures by the policymakers both in the immediate and medium terms.

The quality, reliability and consistency of data of economic indicators will be the first step since the effectiveness of policymaking depends on credible real time data.

Policymakers will have to come out of growth obsession and focus on the quality of growth in terms of distribution of the benefits of growth more equally.

Since the poor and disadvantaged people are yet to overcome the impact of the pandemic and have been affected further due to high prices of essential commodities, the policy should protect the purchasing power of the poor and low-income groups.

CPD has been proposing various measures to ease the burden of rising prices and shrinking purchasing power of low- and fixed-income earning people including selectively reduce taxes at import and domestic stages and expanding social protection.

Besides, strategic sectors such as energy and agriculture will have to be supported through subsidies for economic growth and food security.

The above measures should be combined with higher efforts for domestic resource mobilisation and reduced unnecessary and less important expenditures.

In the FY23 budget, fiscal measures pertaining to the external sector should focus on addressing the adverse impacts of imported inflation.

Experts, Economists, Researchers, Media, among others, took part in the press briefing.