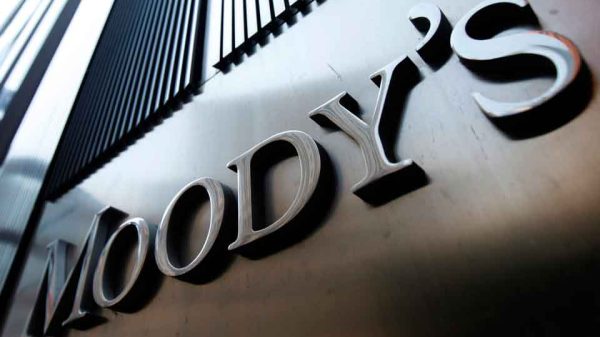 Rising prices will be a bigger and bigger hurdle.

Emerging Asia’s economies will still grow this year, but inflation will be a bigger and bigger hurdle.

Inflation has surged precisely because emerging Asian economies have done so well.

But the road ahead will be a rocky one as central banks rush to recalibrate policy.

Low-inflation Asia is in for a rude awakening—and in many parts of the region, a new dawn of fast-rising consumer prices has already come. Long exempt from the price pressures plaguing the rest of the emerging world, emerging Asian economies are now face-to-face with the sharpest rise in consumer prices in more than a decade.

Though inflation has taken longer to manifest in emerging Asia than in other emerging regions, its ugly knock-on effects will take a larger toll as the year progresses, weighing on growth for the remainder of this year and into the year to come.

Not all is bleak. Even with the hit to China’s economy from its zero-COVID policy and headwinds to growth in the U.S. and Europe, we still expect emerging Asian economies to grow this year and to do so with more haste than the rest of the emerging world. But the road forward will make for a rockier ride as central banks rush to recalibrate policy in the face of inflation’s belated surge.

The end of low-inflation Asia Inflation in most advanced and emerging Asian economies tends to be low to begin with. Abstracting from the currency crises that rippled across Southeast Asia in the late 1990s, consumer prices tend not to fluctuate very much. This is partly due to gains on the supply side of the economy, with growth in labor productivity helping the region absorb the pressures of a rising consumer class.

The main reason, however, is that emerging Asian economies tend to accumulate the kinds of macro imbalances that hold prices down. Think large trade and current account surpluses: With the exception of India, most Asian economies export more than they import. This means that on net they also save more than they spend, sending surplus savings abroad instead of spending them down at home. 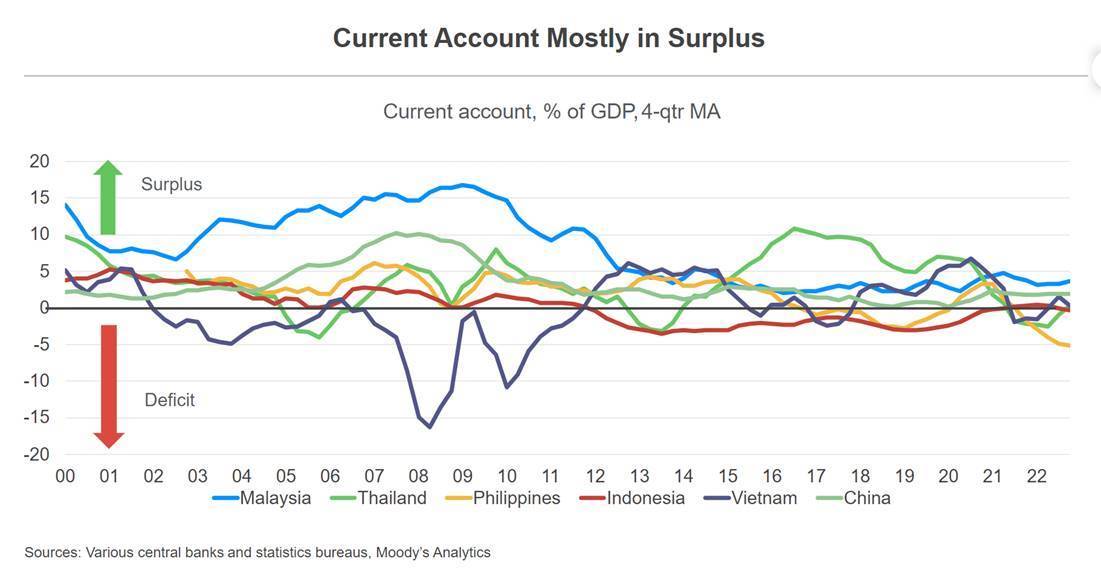 This is not to say that emerging Asia is a total stranger to inflation. The last time global food and energy prices surged, in the runup to the 2008-2009 global financial crisis, inflation rose as well. 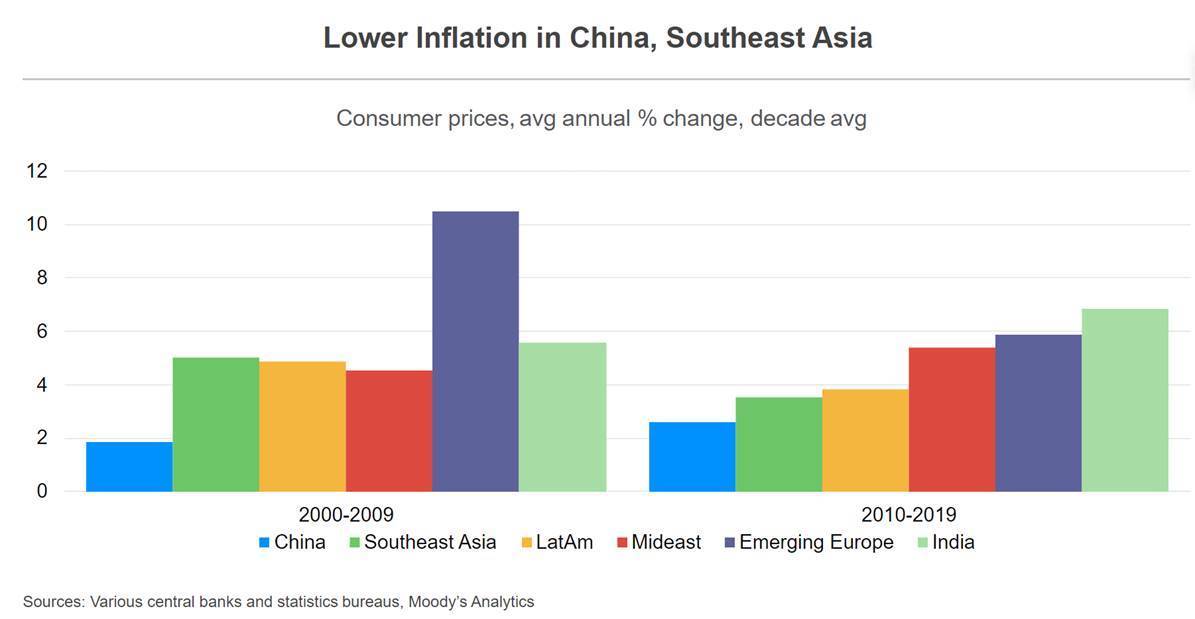 But this time is different. Starting with a slow creep and swirling into a Category 5 hurricane, inflation will make itself felt across the region, landing later than in the rest of the emerging world and proving only slightly less disruptive.

What, where, when and why now?

Why inflation in emerging Asia has taken so long to show has sparked considerable debate. But pull back the binoculars, and a clearer picture comes into view. While transitory forces have played a role in holding prices down—a major one being the inversion of food prices after the spread of swine flu in China, Indonesia and the Philippines—inflation’s how, when and why is a demand-side story.

In short, inflation in Asia is rising—and rising now—precisely because, with the exception of China, the region’s economies performed so well in the first half of the year.

The Delta variant’s blunt-force blow in India and Southeast Asia set the region’s recovery back relative to the rest of the emerging world. When the Russian invasion of Ukraine broke out earlier this year, local labor markets had yet to claw their way back.

Now that the reopening process in India and Southeast Asia is nearly complete, the supply shock from the invasion of Ukraine and lingering supply-chain bottlenecks have crashed into demand. The result is higher inflation—the highest, in some cases, in more than two decades.

If there is any blueprint for how rising prices will play out in emerging Asia, Latin America—where inflation has been surging for over a year—is certainly the place to look.

But something funny is happening in the region: Since the start of Russia’s invasion, Latin America’s major economies have managed to grow, even as underlying metrics of economic health—from jobs and incomes to exports and sentiment—have deteriorated.

This is in part the result of higher commodity prices, something that most Asian economies, with the important exceptions of Indonesia and Malaysia—will be hard pressed to benefit from. But the main driver of Latin America’s momentum is the surge in election-year spending. This has been the case in Chile, Colombia and Peru, where spending in the runup to recent elections is still working its way through the economy, and in Brazil, where a budget-busting constitutional amendment has freed up more cash to spend ahead of presidential elections this October.

Election-year handouts are not unheard of in emerging Asia. But the scale is dwarfed by Latin America, where spending around elections can drive the entire business cycle. While election-year spending clouds the lessons that can be drawn from Latin America’s year of very high inflation, it is a safe bet that emerging Asia will experience the adverse effects of higher prices on hiring, investment, incomes and sentiment without an offsetting boost from government expenditures.

Hawks versus doves Central banks in emerging Asia have kept rates lower for far longer than their emerging market peers. That they have done so is a credit to decades-long efforts to make debt and currency markets more resilient. Because most government debt is now denominated in local currency and because central banks are sitting atop mountains of reserves that are far greater, in many cases, than they will ever need, policymakers have been able to better tune decisions to local macroeconomic conditions.

Now, with inflation rising fast, they are snapping into action. In the latest action, the central bank of the Philippines hiked the benchmark rate 100 basis points in an unscheduled meeting earlier this month. We now expect the Bank of Thailand to raise rates at its meeting in August, leaving only the State Bank of Vietnam in the dovish camp.
Sources: Various central banks and statistics bureaus, Moody’As nayltics
Inflation and monetary policy rates, % Of Hawks and Doves

There is just one catch. Much like Latin America, emerging Asia is severely underbanked. With millions in the informal economy lacking access to financial services, central bank rate hikes will take longer to bite, raising the risk that they could fall further behind the curve. The broad hit to Asian currency and stock markets in part reflects this outcome.

Where rising rates will bite first is on government debt. Debt loads across emerging Asia are not as high as in other troubled regions, but they are not low either. And political turmoil has left leaders unwilling or unable to rein in spending, putting hard-won records of fiscal sustainability at risk.

All of these factors have pushed us to lower the forecast for growth in the rest of this year and the first half of 2023. While we still expect emerging Asian economies to grow this year, easily outshining peer economies in Latin America, emerging Europe, and the Middle East, it won’t be good growth—at least not of the kind that delivers much-needed gains in jobs and incomes.

A word on China

The Chinese economy is getting back to work after the March and April spike in COVID-19 cases and corresponding lockdowns brought consumer activity to a halt. But new challenges abound, particularly in the property sector, where a boycott by homebuyers on mortgage payments for unfinished properties has put homebuilders in a new squeeze.

Our base case is that a new bailout for the construction industry will enable it to muddle through and keep the Chinese economy afloat. But the latest credit crunch—this time sparked by frustrated homebuyers—raises the specter of a darker scenario. It is difficult to underscore the property sector’s importance to the Chinese economy—we estimate its size at around one-quarter of GDP. Our past work on a hypothetical property market downturn points to shock waves in the rest of the emerging world.