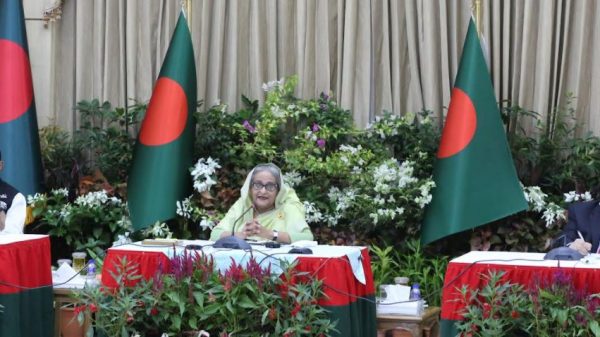 “You people (audience) should say how much money could be allocated for
subsidy . . . more subsidies means it would eat up a lion portion of the
national budget, resulting in hindering the development spree of the
country,” she said.

The premier made this remark in response to a query regarding recent price
hike at the press conference organized at her official residence Ganabhaban
about her just concluded visit to the United Kingdom and France.

She said if the government increases the funds for subsidy, allocation for
country’s development budget will get shrunk.

Sheikh Hasina said the government is supplying fuel at a lower price after
buying it at higher prices from the international market which required huge
amount of subsidy.

“If you (intellectuals and journalists) suggest me how could I make
adjustment in this price gap, I would do whatever you say . . . ,” she said,
adding, “You have to consider the issue.”

Sheikh Hasina said she is running the country and that is why she should
say what the reality is, “all the responsibilities — good or bad — is
shouldered by her”.

She also said her government would look into the matter so that people do
not face any sufferings.

Mentioning that fuel price in the international market has been hiked, the prime minister said the government has been giving subsidies totalling Taka 53,000 crore (  Taka 23,000 crore for only diesel) to diesel, power and others.

Referring to the price hike of diesel in the neighbouring country, she questioned how the government would minimize the gap as already a huge amount of money has been provided as a subsidy for diesel import.

The premier also highlighted the special stimulus given to the business entities and others along with the reduction of interest rate in the time of the Covid-19 pandemic.

She also wanted to know how many people pay tax although all earn money. “People have no shortage of houses, cars, wealth or lifestyles, but how many people really pay tax and the number is very nominal,” she said, adding, “All must put concentration on tax dodging and it is the reality. So, how the money will come to the government?”

Mentioning that there was a hue and cry for electricity once, she said the present government is providing electricity to all people without getting production cost rather giving huge subsidies.

She said that you people know that in 2001, there was a proposal to her to sell gas to other countries but she didn’t agree with it, resulting in the Awami League was thrown away from assuming power in the election.

“This country is mine and my father (Bangabandhu Sheikh Mujibur Rahman) has made this country independent. Soil, people and all of this country are known to me and that is why I didn’t do any sacrifice on the issue of the country’s interest,” she said.

Due to the shortage of gas, she said, her government has moved to import LNG and it is being supplied to people at Taka 9 although the total cost for import and others stood at Taka 60.

“So, the reality has to be understood,” she added.

Sheikh Hasina went on saying that they have put concentration on food supply so people don’t face any hardship and suffer.

She said the people who engaged with road transport and waterways business could not ply their vehicles due to Covid-19 and incurred losses.

“The government also extended assistance to them to run their business,” she added.

Referring to the price hike of fuel, she said, they (transport owners) have grabbed the opportunities.

The Prime Minister said although she was abroad she was connected digitally with the country and after a series of discussions with them (transport owners), the fare has been cut down logically.

“Actually, the government is working on these issues,” she added.