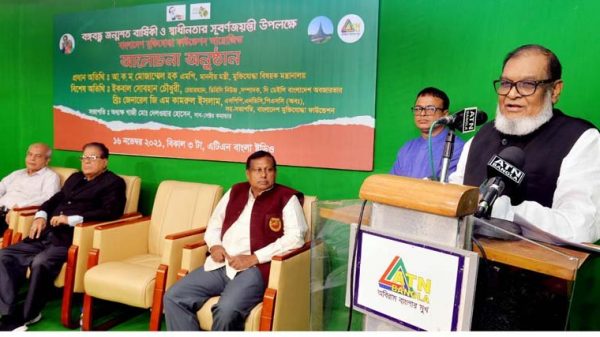 “The new generation needs to know the actual history of Liberation War and independence and ideals of Father of the Nation Bangabandhu Sheikh Mujibur Rahman,” he told a discussion at ATN Bangla Auditorium here this afternoon.

The minister added: “The new generation needs to be properly prepared with the enriched history of Bangladesh and Bangabandhu.”

Mozammel Haque said, “We have to tell our children about the necessity of freedom struggle and Liberation War.”

Expressing grave concern over the distortion of history at different times after the assassination of Bangabandhu, he urged the guardians and parents to be aware of this and let them (children) know the stories of victory.

About the incident of August in 1975, he said there were many killing incidents in the world but the assassination of Bangabandhu was totally different one.

“Bangabandhu along with his family members were not only killed, but also the development of Bangalis was delayed aimed at annihilating the whole nation,” he added.

The minister said the country is moving forward under the leadership of Prime Minister Sheikh Hasina, the daughter of Bangabandhu. Everyone must come forward to complete the unfinished task of the Father of the Nation, he added.

Iqbal Sobhan Chowdhury said deep-rooted conspiracies are still going on against the Liberation War and independence of the country. The defeated enemy is still active, he added.

He called upon all the pro-liberation forces to remain united to this end.