MYANMAR: ESCALATION OF CONFLICT IN THE NORTHWEST 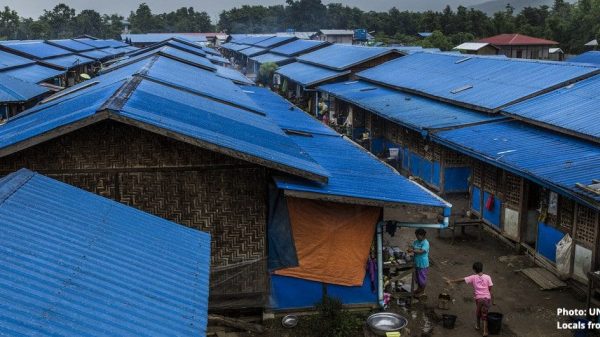 MYANMAR: ESCALATION OF CONFLICT IN THE NORTHWEST

Fighting in the northwest between the Myanmar Armed Forces (MAF) and the Chinland Defence Force in Chin State and the local People’s Defence Forces (PDFs) in Magway and Sagaing regions has recently escalate.

In Chin State, more than 160 houses, two churches and an NGO office in Thantlang Town were reportedly burnt down on 29 October, according to The United Nations Office for the Coordination of Humanitarian Affairs (UNOCHA) release on November 3 2021.

Around 37,000 people, including women and children, have been newly displaced by fighting which started in May in the northwest, in addition to around 7,600 people previously displaced by earlier conflict between the Arakan Army (AA) and the MAF in Paletwa, Chin State, since December 2019.

The humanitarian, human rights and security situation in Chin State, as well as in neighbouring Magway and Sagaing regions, is deteriorating with intensified armed clashes reported between the MAF and local PDFs. Displacement has increased as well as rights violations and causalities. In Chin State, more than 160 houses, two churches and an NGO office in Thantlang Town were reportedly burnt down on 29 October, in addition to other townships facing similar destruction of property since August. Most residents had already fled in late September in anticipation of the conflict. However, UNICEF is concerned about the safety of children who are thought to remain in Thantlang Town and is calling for immediate efforts to ensure the safety of these children, and of all children impacted by the conflict.

In total, around 37,000 people, including women and children, have now been displaced in the northwest since the clashes started in May. This includes at least 18,300 people who have been displaced across several townships in Chin State. Of those people, more than 10,000 internally displaced persons (IDPs) are sheltering in Thantlang Township in Chin State next to the Indian border. The newly displaced people in Chin State are in addition to some 7,600 people who remain displaced since December 2019 in Paletwa in southern Chin due to the conflict between the AA and the MAF. About 15,000 people have reportedly crossed the border into India since the military takeover on 1 February.

The total number of displaced people in Sagaing and Magway regions remains mostly unchanged for the last two weeks as some have returned to their areas of origin, while others have been newly displaced. Around 7,000 people remain in the displacement sites in Kale, Kani, Khin-U and Mingin townships in Sagaing Region and around 12,300 remain in the displacement sites in Gangaw, Pauk and Saw townships in Magway Region.

Humanitarian Needs & Response
The recent conflict is risking the safety of tens of thousands of civilians in the northwest, with reports of people seeking refuge in the jungle with little access to food, shelter, medicine or any basic services. Coupled with increased violence and targeted attacks, civilians are currently unable to access much needed emergency support and food assistance, leaving them more vulnerable. The community, including most IDPs across Chin State, is facing food shortages. The recent
intensification of the conflict will also limit agricultural activity by farmers. Dire local shortages of food are likely to be 37,000 people newly displaced across the northwest since May 160+ houses reportedly burnt in Thantlang Town in Chin State. 15,000 people have reportedly crossed into
India since February exacerbated by the unavailability of rice and other commodities because of conflict-related disruptions to supply lines from Sagaing and Magway regions. The price of fuel and rice has also increased in Paletwa, Chin State. With the arrival of winter and colder temperatures in higher altitudes, especially in Chin and its bordering areas of Sagaing and Magway regions, the
need for relief items including blankets and warmer clothing will also increase.

Humanitarian organisations are working mostly through local actors to deliver assistance to these areas and stand ready
to further scale-up their efforts but require improved access to do so. Access has been very controlled and extremely limited
for humanitarian actors. Since May, access has only been approved to displacement sites in the urban area of Mindat
township in Chin State where some agencies have provided health services and distributed rice, shelter, NFIs, family kits
and PPE in recent weeks. No approval has been granted for Sagaing and Magway regions. Humanitarian partners are
identifying ways to deliver through local actors and religious leaders. However, local actors are now increasingly under
scrutiny. Challenges also remain in verifying data on displacement and needs, particularly with the internet shutdown that
has affected many townships in Chin, Sagaing and Magway since mid-September.