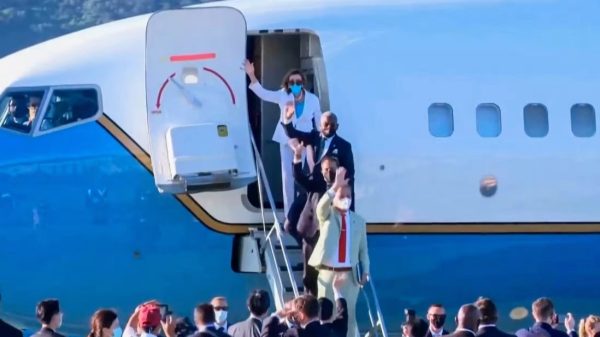 US House Speaker Nancy Pelosi has wrapped up a whirlwind visit to Taiwan that prompted strong warnings from Beijing.

Pelosi, accompanied by five US congress members, boarded a US Air Force plane for South Korea late Wednesday afternoon for the fourth leg of her Asia tour.

Before leaving the island, Pelosi tweeted: “Make no mistake: America remains unwavering in our commitment to the people of Taiwan– now & for decades to come.” 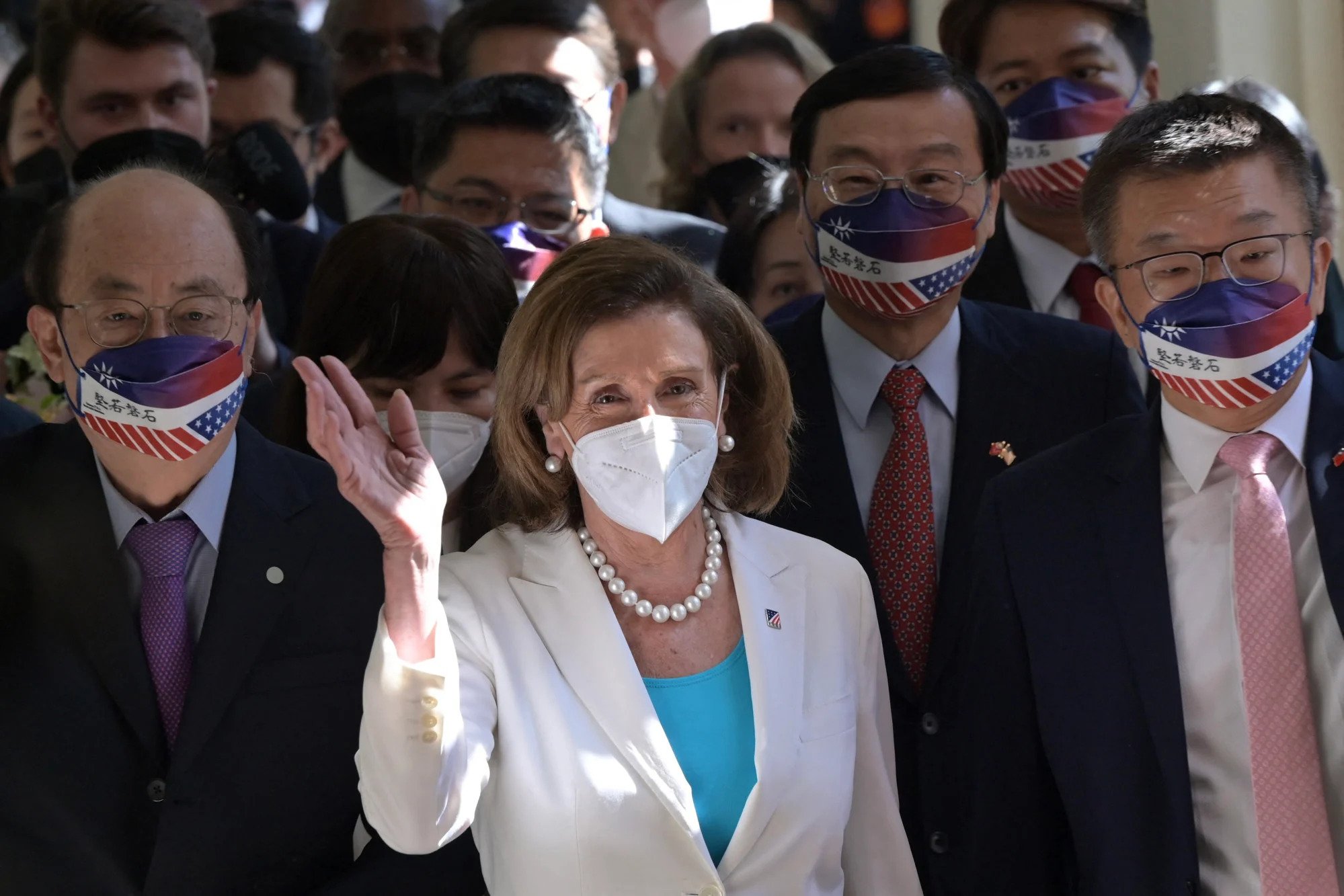 During her brief stay, she also held talks with leading chip suppliers and human rights advocates.

The small group of pro-democracy activists in the meeting with Pelosi at the Jing-Mei Human Rights Memorial and Cultural Park included former Causeway Bay Bookstore owner Lam Wing-kee, who fled to the island from Hong Kong in 2019, and former Tiananmen student movement leader Wuer Kaixi.

Also attending the closed-door meeting was Lee Ming-che, a Taiwanese NGO worker who was imprisoned in mainland China for subversion in 2017 before being released this year.

The meeting was organised by the American Institute in Taiwan, the US representative office on the island in the absence of formal ties.

More than 100 police officers were on had at the park to prevent protesters from entering.

Dozens of pro-unification supporters, holding placards and banners, protested against Pelosi’s visit, saying it undermined peace and stability on the island.

Addressing the media, Pelosi said earlier that Beijing could not stand in the way of visits by other members of the US legislature to Taiwan.

“And I just hope that it’s really clear that while China has stood in the way of Taiwan participating, and going to certain meetings, that they understand that they will not stand in the way of people coming to Taiwan,” she said.

Asked if the US Congress would consider inviting Taiwanese President Tsai Ing-wen to speak on Capitol Hill, Pelosi said there had not been a joint session for a long time due to Covid-19 but “I would hope that opportunity will be there”.

She also said the US supported Taiwan’s status quo and “we don’t want anything happen to Taiwan by force”.

‘A model for the region’

Pelosi told the media conference that “we have to show the world … the success of the people of Taiwan, their courage to change their own country to become more democratic, their respect for people and … quite frankly a model in this region in those respects”.

“Strength, goodwill, and again, the demonstration of a democracy that has evolved to a stronger place now and offers a very strong contrast to what’s happening in mainland China. No more evidence [is] needed than what happened in Hong Kong under ‘one country, two systems’.”

Pelosi said the approval of a US chip bill would further encourage economic exchanges.

“I know that some Taiwanese businesses, the significant ones, are already planning to invest in manufacturing in the US,” she said.

She commended Taiwan for the intellectual resources that had help build a successful tech industry on the island.

Pelosi made several references during the day to Taiwan’s success in containing Covid-19.

“I want to salute Taiwan for the leadership you have provided in fighting Covid, probably one of the highest rates of vaccination, but also the lowest number of deaths from Covid. A real model for the world. It’s about science, but it’s also about community acceptance of a plan. And that is called leadership,” she said.

But Pelosi did not referred directly to Taiwan’s attempts to take part in the World Health Organization, another flashpoint of cross-strait relations.

Tsai Ing-wen hosted a lunch for the US group attended by Vice-President William Lai and several other senior government officials.

Pelosi also met TSMC chairman Mark Liu in the morning and discussed the significance of the US’ CHIPS and Science Act, according to Ker Chien-ming, caucus leader of the ruling Democratic Progressive Party.

In an earlier meeting with Pelosi, Taiwanese President Tsai Ing-wen said the island would not back down in the face of military threats, vowing to strengthen Taiwan’s defences and remain a reliable US partner.

“We will firmly uphold our nation’s sovereignty and continue to hold the line of defence for democracy at the same time,” Tsai said.

Tsai said: “Taiwan is committed to maintaining peace and stability in the Taiwan Strait. And we will make Taiwan a key stabilising force for regional security, ensuring a free and open Indo-Pacific as well as stable development of global trade and supply chains.”

Tsai said Russia’s invasion of Ukraine earlier this year made security over the Taiwan Strait another focus of worldwide attention.

She also presented Pelosi with a medal of honour for her contribution to the island, saying the US speaker had long stood firm in safeguarding freedom, democracy and human rights.

Pelosi later tweeted that it was a high honour to receive the Order of Propitious Clouds with Special Grand Cordon: “a symbol of our treasured friendship”.

US commitment to Taiwan

Pelosi said her visit was to make it “unequivocally clear we will not abandon our commitment to Taiwan”.

“American solidarity to Taiwan is crucial and that is the message we are bringing today,” she said.

Pelosi also said American determination to preserve democracy in Taiwan and the rest of the world remained unchanged.

It proved again the US was the “biggest destroyer of peace and regional stability in the Taiwan Strait”, Wang said.

“Facing the national mission of uniting the country, the Chinese people have the backbone to not believe in evil and not be afraid of ghosts; the will that could not be intimidated or shattered; the determination to be unified; and the ability to resolutely defend national sovereignty and dignity.”

Taiwan’s defence ministry condemned Beijing for staging war games around the island, saying it would only sabotage peace and stability in the region.

“Such an irrational move to undermine regional peace and stability will not help China’s international image, but will also hurt the feelings of people on both sides of the Taiwan Strait,” ministry spokesman Sun Li-fang said in Taipei on Wednesday.

Beijing announced late on Tuesday that it would stage six live-fire drills in waters around the self-ruled island for three days from Thursday.

The Chinese Commerce Ministry has ordered a halt to exports to Taiwan of natural sand, a key material used in construction, as part of a series of trade measures following Pelosi’s visit.

The mainland has also suspended imports of Taiwanese citrus fruit and two types of fish.

It was not clear if the action was directly linked to the US speaker’s trip, as selected products have been banned severally due to hygiene issues.

“We are warning Tsai Ing-wen and the DPP that colluding with external forces to carry out provocations of ‘independence’ for personal and party gain will only accelerate its own destruction and push Taiwan into the abyss of disaster,” TAO spokesman Ma Xiaoguang said.

“History has and will continue to prove that the separatism of ‘Taiwan independence’ will never succeed, and betraying the interests of the country will be a complete failure.”

Earlier in the morning, Pelosi and five members of the US Congress met deputy speaker Tsai Chi-chang, pledging to increase economic relations with the island.

Before the closed-door meeting with the deputy speaker, Pelosi highlighted bipartisan support for her visit.

She also emphasised “great opportunities” for economic cooperation between Taiwan and the United States.

Pelosi said there were three purposes of the visit. “One is security, the security for our people and global security. Two is economics. We need to spread as much prosperity as possible, and three is governance.”

She also highlighted her 1991 visit to Beijing.

“It was bipartisan when we were on Tiananmen Square [30 years ago]. And we were there specifically making the statement on human rights. But our visit was about human rights, [and] was about unfair trade practices.”

Deputy speaker Tsai praised Pelosi as a true friend of Taiwan who had steadfastly supported democratic development on the island. “Taiwan is a reliable ally of the US … Together we can work together to protect democracy,” he said.

Mainland news portals have widely reported the meeting between Tsai Ing-wen and Pelosi, with most citing a Global Times report, as well as mainland officials condemning the meeting.

Discussions about pro-Beijing groups in Taipei protesting against Pelosi’s visit amassed more than one billion clicks.

Beijing – which sees Taiwan as part of its territory and has not renounced the use of force to bring it under mainland control – has repeatedly warned Pelosi not to visit, saying there would be a strong response if she did.

Beijing sees the visit as a serious violation of its one-China principle, especially because Pelosi is the most senior US politician to visit Taiwan since her predecessor Newt Gingrich in 1997. Pelosi has also been vocal in her support of democratically run Taiwan and is a long-time critic of Beijing.

Most countries, including the United States, acknowledge the one-China principle and do not recognise Taiwan as a sovereign state. But Washington opposes any attempt by Beijing to unite Taiwan by force. The US does not have formal diplomatic relations with Taiwan and Beijing has warned Washington against having official contact with Taipei and supplying it with weapons.

Pelosi began her Asia tour on Monday in Singapore, where she met Prime Minister Lee Hsien Loong, who underscored the importance of stable US-China relations. She travelled to Malaysia earlier on Tuesday, the second stop on what is officially a four-nation trip that will also take her to South Korea and Japan.