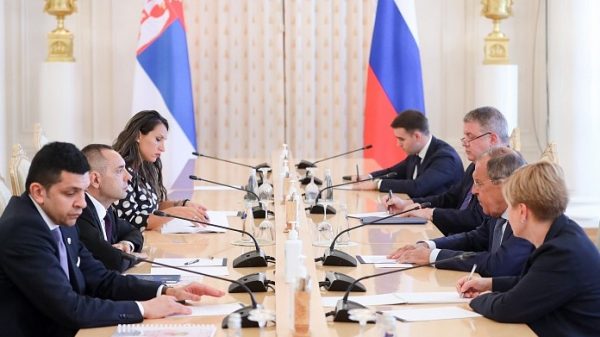 Foreign Minister Sergey Lavrov’s opening remarks during a meeting with Minister of Internal Affairs of the Republic of Serbia Aleksandar Vulin, Moscow, August 22, 2022.

We are glad to welcome you in Moscow at our regular meeting.

Despite a difficult international situation, our dialogue is progressing at all levels.

President of Russia Vladimir Putin and President of the Republic of Serbia Aleksandar Vucic talk over the phone, compare notes, and discuss our future actions.

There are also contacts between parties to the Intergovernmental Committee for Trade, Economic, Scientific and Technological Cooperation. The Commission for Military-Technical Collaboration is also functioning.

Regrettably, my June visit to Belgrade failed to materialise. Those who have scuttled this visit at the bidding of their “higher-ups” should know that their nasty tricks will not shake Russia-Serbia relations, which are based on the foundation of firm friendship between our people, and have deep historical, spiritual, and civilisational roots.

We will be glad to see Serbia’s Foreign Minister in Moscow at any convenient time. Today, we will discuss, along with bilateral relations, the regional agenda, primarily the situation in and around Kosovo. We know about the results of the recent round of EU-mediated talks in Brussels between President Vucic and Mr Albin Kurti. There were no take-aways. On the contrary, a rollback from former agreements is observed and tensions persist in northern Kosovo.

We see this as a result of the US-led West’s long-standing policy aimed at undermining all European security principles coordinated within the OSCE.

These principles imply equal and indivisible security and make it obligatory for all countries to refrain from strengthening their security at the expense of impinging on the security of others.

Russia and Serbia (let me note this in particular) are consistently committed to these principles, which have been approved at the highest level.

We will defend precisely these approaches to the further conduct of affairs. The West’s policy of tearing down its obligations remains evident to this day, in the Balkans among other areas, and in the situation in Ukraine that the West has provoked.

As for Kosovo, Russia’s position remains unchanged. It has been repeatedly reiterated by President Vladimir Putin. We are in favour of Belgrade and Pristina reaching a viable and mutually acceptable solution based on UN Security Council Resolution 1244.  There is no doubt that it should first and foremost conform to international law and receive an obligatory approval from the UN Security Council.  We will only accept a solution that will suit the Serbs. We will give our Serbian friends all-out support in reaching this result.

I think that your visit is very important in terms of maintaining an intense dialogue at the political level. I am confident that it will help to strengthen and promote our cooperation in all areas, both now and in the future.

Question: On August 1 of this year, US President Joe Biden said that his administration was ready to negotiate a new arms control framework to potentially replace START-3 and that Russia should demonstrate a willingness to engage in this. Is Moscow ready to discuss this issue with Washington again?

Sergey Ryabkov: We have repeatedly confirmed that in principle we are open to serious, pragmatic and result-oriented cooperation aimed at reducing tensions and risks, preventing a dangerous escalation and an arms race, and enhancing strategic stability, including through arms control. We are also well aware that the START Treaty is not of an indefinite duration and ideally must be replaced with a new agreement or agreements.

That said, we still need to see whether the United States will change its patently destructive course and be prepared to conduct a dialogue based on equality, and consider our security interests and concerns, working together on creating the foundations for a new, fairer and more stable architecture of international security.

Question: For several years now, the United States has insisted that China join any arms control talks, while Russia urges the UK and France to take part. Considering that Moscow and Washington have been unable to establish a bilateral dialogue, how realistic is this five-party format? What are the plans for cooperating with the countries that are not members of the official nuclear club but still possess nuclear arms?

Sergey Ryabkov: We are convinced that any attempts to force anyone into a dialogue are counterproductive because such cooperation, bilateral or multilateral, should imply joint, committed work in the search for mutually acceptable results. By way of illustration, I would like to remind you the Trump administration’s attempts to compel China to take part in an arms control dialogue. These attempts appeared undiplomatic and sometimes even ludicrous. As could be expected, China did not give in to this crude pressure.

We are averse to these methods. We insist that any future cooperation between nuclear powers must be based on consensus and take into account the interests of all parties involved. This approach befits any format, whether we refer to potential contacts between the nuclear powers recognised in the NPT context, or efforts to enlist other states with military nuclear potentials. Our priority remains the same: we would like the UK and France to join this process as US military allies in the “nuclear alliance” framework. It is also necessary to bear in mind that, as distinct from a dialogue on strategic stability, the opportunities for further progress towards nuclear arms reductions on the bilateral Russian-US basis alone have been practically exhausted.

Question: The dialogue on strategic stability received a new impetus after the extension of START-3 in 2021. At that time, you had several meetings with your counterpart, US First Deputy Secretary of State Wendy Sherman. By the beginning of 2022, the meetings evolved into talks on security guarantees, with strategic stability moving to the fore. After February 24 of this year, this dialogue was suspended by the US.  Will such talks resume from the same positions as when they were frozen? Is it realistic to expect to reach agreements on nuclear issues while Russia conducts its special military operation in Ukraine?

Sergey Ryabkov:  Speculating about the prospects for a strategic dialogue with the US, especially when it was the Americans who cut it off, is a thankless task. I will put it straight – the very opportunity for its resumption is far from certain, given Washington’s recklessly aggressive policy towards Russia. Naturally, we are monitoring signals concerning the resumption of the dialogue on START-related matters, but it is still unclear what they mean, and, in general, talks are not held via the media.

As for our view of the framework for a strategic dialogue and its desired results, all of this is common knowledge and remains unchanged. Our idea is to draft a “new security equation” that will consider all factors affecting strategic stability. With this in mind, we are seeking to embrace the entire range of offensive and defensive, nuclear and conventional weapons with a strategic potential.

Question: NATO will not enter the conflict on Kiev’s side because a direct clash between the alliance and Moscow could lead to a nuclear war. What is the likelihood of this clash in your opinion?

Sergey Ryabkov: We have repeatedly expressed our views on this issue, including at the Foreign Minister level. Sergey Lavrov has noted that the nuclear risks are quite substantial under the current turbulent conditions and should not be underestimated. At the same time, they ought not to be artificially fanned.

In this context, we believe that the overriding goal is for all the five nuclear powers to maintain their commitment to the premise that any war between countries possessing nuclear weapons is inadmissible. This approach remains relevant and has become even more important with the exacerbation of the Ukraine crisis, which has occurred through the fault of the Kiev regime and its Western patrons.

NATO countries’ destructive course of ignoring our “red lines” and involving themselves into a confrontation with Russia in Ukraine, where they are teetering on the brink of a direct armed conflict, is a high-risk affair. Obviously, this approach is fraught with the potential for further escalation, up to and including an armed clash between nuclear powers with all the grievous consequences this involves. It is imperative that we prevent this.

Sergey Ryabkov: You correctly referred to the Foundations of the State Policy of the Russian Federation on Nuclear Deterrence. This policy’s doctrinal points are explicit:  hypothetically, Russia allows for a nuclear response solely as a reaction to an aggression involving the use of WMD’s against us or our allies, or an aggression with the use of conventional arms, which threatens the very existence of the state. In both cases, “aggression” is the key word. In other words, Russia can use nuclear arms only in response to an attack, doing this for self-defence under extraordinary circumstances. There is no room for assumptions or fantasies here.

Question: Earlier, Washington suggested exchanging Russian inmate Viktor Bout for American citizens Paul Whelan and Brittney Griner. Is this proposal realistic? When and in what conditions could such an exchange take place?

Sergey Ryabkov: The exchange of Russian and American prisoners is a very sensitive issue. It is unacceptable to discuss this in public like the current US administration is doing in a bid to gain political points.

We have repeatedly urged Washington to observe the rules of “quiet diplomacy” and to not interfere with the efforts of the competent agencies authorised by our presidents to seek solutions to specific exchange problems, letting them do their work professionally. This was how it became possible to release Russian pilot Konstantin Yaroshenko who was serving a 20-year term in an American prison on far-fetched charges. He was exchanged for US student Trevor Reed who was convicted in Russia for having attacked a police officer.

What remains is to hope that the United States will refrain from slipping into propaganda and will act responsibly on this issue, following the “do-no-harm” principle.