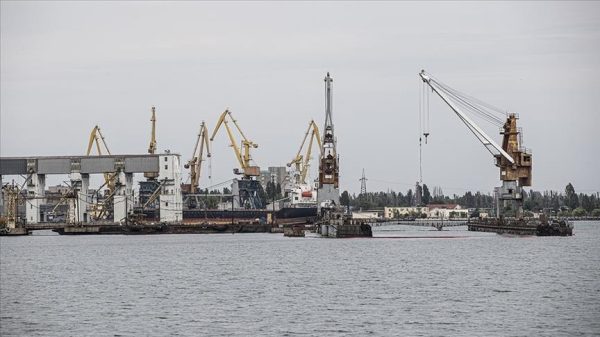 A new route for merchant ships carrying Ukrainian grain came into effect on Friday, according to the UN Information Center.

The route, 320 nautical miles (368 miles) long, connects the Ukrainian ports of Odesa, Chornomorsk, and Yuzhny to the inspection areas in Turkish territorial waters, the center in Türkiye said in a press release on Thursday.

The maritime humanitarian corridor, which forms part of this route and extends to the southernmost point of Ukraine’s maritime boundaries, was adjusted after three weeks of use to shorten transit and ease planning for the shipping industry, it added citing the Joint Coordination Center in Istanbul.

As merchant vessels participating in the initiative pass via the maritime humanitarian corridor, no military ship, aircraft, or unmanned aerial vehicle will be allowed to approach within 10 nautical miles, with “provocations or threats” to be reported immediately to the Joint Coordination Center.

The new route’s coordinates have been disseminated through the international navigation system NAVTEX.

Türkiye, the UN, Russia, and Ukraine signed an agreement in Istanbul on July 22 to resume grain exports from the Ukrainian Black Sea ports of Yuzhny, Chornomorsk, and Odesa, which were halted due to the Russia-Ukraine war, now in its seventh month.

The Joint Coordination Center, with officials from the three countries and the UN, has been set up in Istanbul to oversee the shipments.

On Thursday, Ukrainian Infrastructure Minister Oleksandr Kubrakov said that since the first ship left Ukraine under the deal on Aug. 1, a total of 39 ships with more than 850,000 tons of agricultural products have left ports.

*Writing by Sevilay Beki in Istanbul*