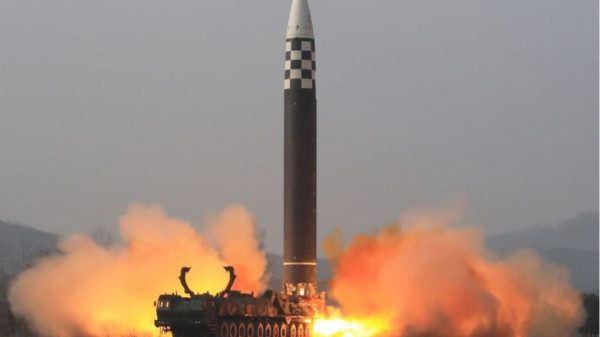 North Korea test-fired a salvo of eight short-range ballistic missiles toward the sea on Sunday, South Korea’s military said, extending a provocative streak in weapons demonstrations this year that U.S. and South Korean officials say may culminate with a nuclear test explosion.

Possibly setting a single-day record for North Korean ballistic launches, the missiles were fired in succession over 35 minutes from the Sunan area near the capital, Pyongyang, according to South Korea’s Joint Chiefs of Staff. South Korea’s military didn’t immediately say how far the missiles flew but noted it has heightened its monitoring in case the North fires more missiles.

The launches came a day after the U.S. aircraft carrier Ronald Reagan concluded a three-day naval drill with South Korea in the Philippine Sea, apparently their first joint drill involving a carrier since November 2017, as the countries move to upgrade their defense exercises in the face of growing North Korean threats.

The office of South Korean President Yoon Suk Yeol said his national security adviser, Kim Sung-han, will convene a National Security Council meeting to discuss the launches. Japanese Prime Minster Fumio Kishida called for maximum efforts to gather information about the launches and to ensure the safety of aircraft and vessels, although there were no immediate reports of damages.

The U.S. Indo-Pacific Command said it was aware of North Korea’s multiple ballistic missile launches but assessed that the event doesn’t pose an “immediate threat to U.S. personnel or territory, or to our allies.”

The launch was North Korea’s 18th round of missile tests in 2022 alone — a streak that has included the country’s first demonstrations of intercontinental ballistic missiles in nearly five years — as it continues to exploit a favorable environment to push forward weapons development with the U.N. Security Council divided over Russia’s war on Ukraine.

Experts say North Korean leader Kim Jong Un’s brinkmanship is aimed at forcing the United States to accept the idea of the North as a nuclear power and negotiating economic and security concessions from a position of strength.

South Korean and U.S. officials say there are signs that North Korea is also pressing ahead with preparations at its nuclear testing ground in the northeastern town of Punggye-ri. The North’s next nuclear test would be its seventh since 2006 and the first since September 2017, when it claimed to have detonated a thermonuclear bomb to fit on its ICBMs.

On Friday, U.S. President Joe Biden’s special envoy for North Korea, Sung Kim, said Washington is “preparing for all contingencies” in close coordination with its Asian allies as he participated in a trilateral meeting in Seoul with his South Korean and Japanese counterparts over the nuclear standoff with North Korea.

The United States has vowed to push for additional international sanctions if North Korea conducts a new nuclear test, but the prospects for further U.N. Security Council measures appear dim.

Russia and China vetoed a U.S.-sponsored resolution that would have imposed additional sanctions on North Korea over its latest ballistic tests on May 25, which South Korea’s military said involved an ICBM flown on a medium-range trajectory and two short-range weapons.

Those tests came as Biden wrapped up his trip to South Korea and Japan, where he reaffirmed the U.S. commitment to defend both allies in the face of the North’s nuclear threat.

North Korea in March launched an ICBM almost straight up at full-range capacity and saw it fly higher and for longer than any weapon it had ever tested, demonstrating the potential to reach the entirety of the U.S. mainland.

While Kim’s ICBMs have garnered much international attention, he has also spent the past three years expanding his arsenal of shorter range solid-fuel missiles threatening South Korea and Japan. He has punctuated his tests with repeated comments that the North would use its nuclear weapons proactively when threatened or provoked, which experts say portend an escalatory nuclear doctrine that may create greater concerns for neighbors.

Nuclear negotiations between Washington and Pyongyang have stalled since 2019 over disagreements in exchanging the release of crippling U.S.-led sanctions against North Korea and the North’s disarmament steps.

Despite deepening economic woes, Kim has shown no willingness to fully surrender an arsenal he sees as his strongest guarantee of survival and is clearly trying to convert the dormant denuclearization talks into a mutual arms reduction negotiation with the United States, experts say.

Kim’s pressure campaign comes as the country deals with a deadly COVID-19 outbreak across his largely unvaccinated autocracy that lacks public health tools.

GAVI, the nonprofit that runs the U.N.-backed COVAX distribution program, said Friday it understands that North Korea has accepted an offer of vaccines from ally China and has started to administer doses. It isn’t immediately clear how many doses of which vaccines the North received or how the country was rolling them out.