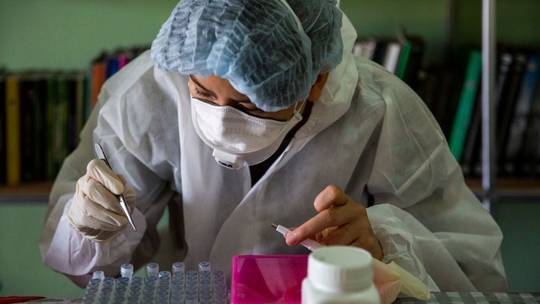 Dhaka August 09 2022 (RT) :
Taiwan is bracing for the possible spread of a novel and potentially deadly henipavirus that spreads from animals to humans.

At least 35 people in China have become infected with a novel henipavirus that apparently spreads from animals to humans, setting off alarm bells in neighboring Taiwan over a potentially dangerous pathogen.

Taiwanese laboratories will need to establish standardized testing procedures to identify the Langya henipavirus (LayV), Chuang Jen-hsiang, deputy director of Taiwan’s Centers for Disease Control (CDC), told reporters on Sunday. Genome sequencing of the virus is expected to be completed within about one week, he said.

Chuang made his comments three days after the New England Journal of Medicine posted a study on the newly discovered virus, which was detected in China’s Shandong and Henan provinces. All of the affected patients had high fevers, while at least half were also experiencing fatigue, coughing, loss of appetite and a drop in white blood cells.

Deadlier than Covid-19, but less contagious: What we know about Nipah bat-borne virus threatening to become new scourge in India.

More than one-third of patients suffered liver failure, and 8% had kidney failure. The study said LayV is part of the Paramyxoviridae family of negative-strand RNA viruses, which can cause “fatal disease.” Its emergence comes as public health officials around the world are still dealing with the Covid-19 pandemic, which has reportedly killed more than 6.4 million people.

It’s not yet known whether the pathogen can spread from human to human, according to researchers. Testing on animals in the affected areas revealed that 5% of dogs and 2% of goats had been infected. Shrews might be key carriers of LayV, inasmuch as 27% tested positive.

None of the 35 infected humans had close contact with each other or a common exposure history, Chuang said. Contact tracing indicated that no family members or other individuals exposed to the infected people had contracted the virus.

The Taiwanese CDC will work with agriculture regulators to study whether similar pathogens exist in species native to the self-governing island, Chuang said. The Chinese outbreak hasn’t caused any deaths so far, he added.

Chinese researchers discovered a novel henipavirus, called Mojiang paramyxovirus (MojV), in 2013. Rats living in an abandoned copper mine in Yunnan province were found to be infected with the virus.

Three men who had been working in the mine fell ill with severe pneumonia. They died long before scientists arrived on scene, so no direct connection to MojV was confirmed.